The flooding emergency in southeast Texas has proved to be deadly with at least two confirmed deaths.

BEAUMONT, Texas - The slow-churning remnants of Tropical Storm Imelda dangerously flooded parts of southeast Texas on Thursday, scrambling rescue crews and volunteers with boats to reach scores of stranded drivers and families trapped in their homes during a relentless downpour that drew comparisons to Hurricane Harvey two years ago.

Officials in Harris County, which includes Houston, said there had been a combination of at least 1,000 high-water rescues and evacuations to get people to shelter. More than 900 flights were canceled or delayed in Houston, and further along the Texas Gulf Coast, authorities warned that a levee could break near Beaumont in Jefferson County.

A 19-year-old man drowned and was electrocuted while trying to move his horse to safety, according to a message from his family shared by the Jefferson County Sheriff's Office. Crystal Holmes, a spokeswoman for the department, said the death occurred during a lightning storm.

A man in his 40s or 50s drowned when he tried to drive a van through 8-foot-deep floodwaters near Bush Intercontinental Airport in Houston during the Thursday afternoon rush hour, Harris County Judge Ed Gonzalez said.

The National Weather Service said radar estimates suggested that Jefferson County was deluged with more than 40 inches of rain in a span of just 72 hours.

Even when Houston was finally rid of the worst, downtown highways remained littered with abandoned cars submerged in water. Thousands of other drivers were at a practical standstill on narrowed lanes near flooded banks.

"The water kept rising. It kept rising. I couldn't believe it," said Ruby Trahan Robinson, 63. She uses a wheelchair and had a portable oxygen tank while getting settled into a shelter at city hall in the small town of China, just outside Beaumont.

Houston Mayor Sylvester Turner evoked the memory of Harvey -- which dumped more than 50 inches of rain on the nation's fourth-largest city in 2017 -- while pleading with residents to stay put. City officials said they had received more than 1,500 high-water rescue calls to 911, most from drivers stuck on flooded roads, but authorities described a number of them as people who were inconvenienced and not in immediate danger.

Ahead of the evening rush hour, Houston officials urged commuters to stay in their offices rather than embark on flooded and already jammed highways. Turner made a similar appeal to parents of schoolchildren as the Houston Independent School District -- Texas' largest with more than 200,000 students -- did not cancel classes or shorten the day unlike neighboring districts in the path of the storm.

Gov. Abbott has declared a state of disaster for 13 counties where Imelda has caused widespread flooding.

Imelda is the first named storm to impact the Houston area since Harvey hovered for days and inundated the flood-prone Gulf Coast. That storm dumped more than 5 feet of water near the Louisiana border, and two years later, it looked in some places like Harvey was playing out all over again.

Large swaths of Interstate 10 were turned into waterways and closed. And even as the intensity of the storm weakened, Harris County officials warned that some of their 4.7 million residents might not see high waters recede in their neighborhoods until the weekend. 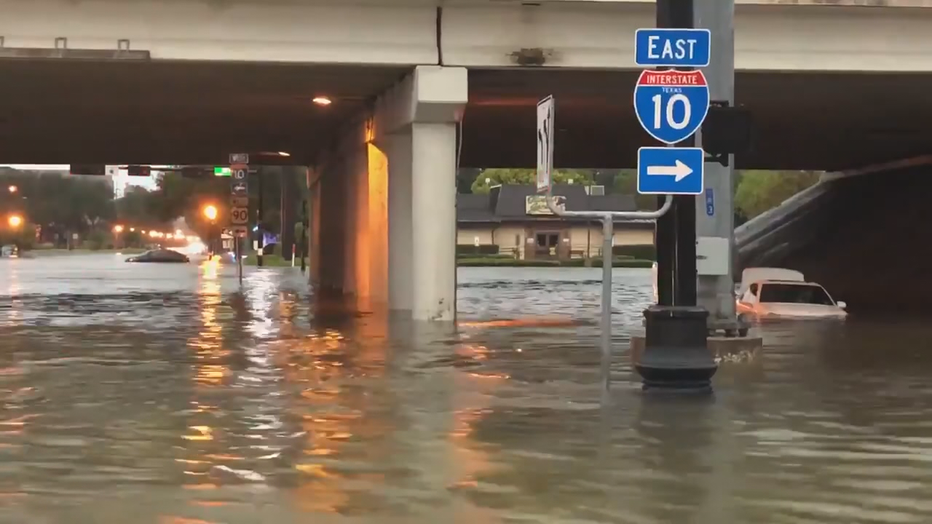 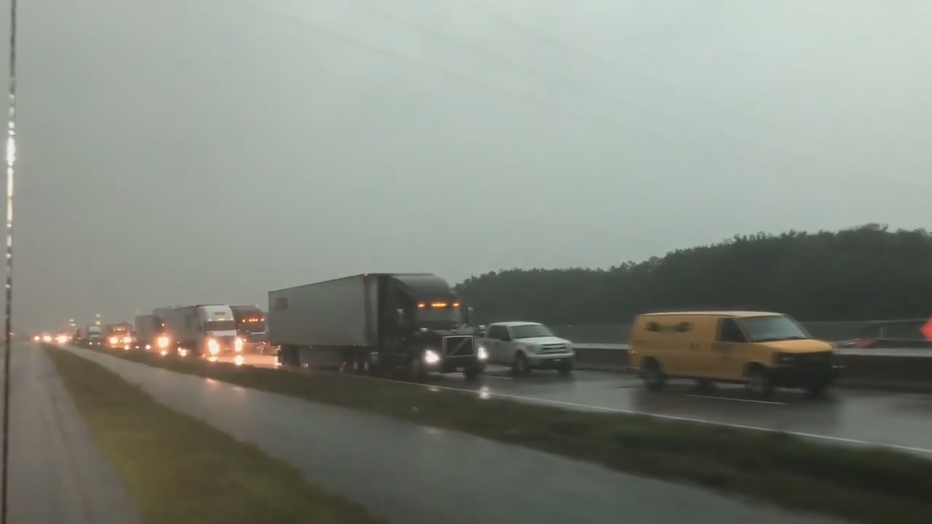 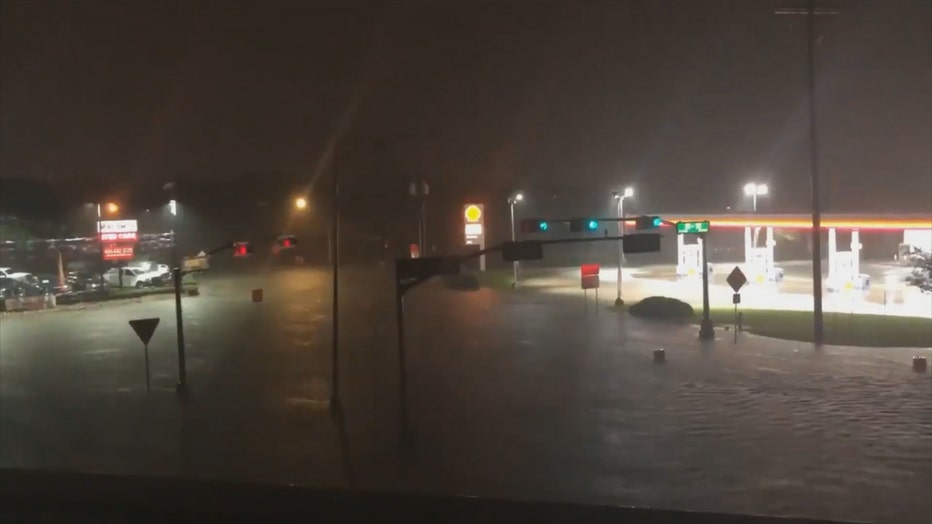 In Winnie, a town of about 3,200 people 60 miles east of Houston, a hospital was evacuated.  Chambers County Sheriff Brian Hawthorne said emergency workers completed more than 300 rescues overnight and some residents were up on their roofs because of rising floodwaters.

"This is worse than Harvey," Hawthorne said. "The hospital never took on water in Harvey many of our homes never had water in harvey that have flooded tonight."

During Harvey, Beaumont's only pump station was swamped by floodwaters, leaving residents without water service for more than a week. The Jefferson County sheriff's office said in a Facebook post that residents of an area where a levy was deteriorating should use their boats to pick up neighbors and carry them to safety.

Eight Fort Worth firefighters are deployed with Texas A&M Task Force 1 and are performing many of the Beaumont water evacuations. Dallas Fire-Rescue was called to help Thursday morning and headed to Beaumont with two rescue boats.

Thunderstorms had spawned several weak tornadoes in the Baytown area, about 25 miles east of Houston, damaging trees, barns and sheds and causing minor damage to some homes and vehicles.

Coastal counties, including Brazoria, Matagorda and Galveston, were hit hard by rainfall through Wednesday. Sargent, a town of about 2,700 residents in Matagorda County, had received nearly 20 inches of rain since Tuesday.

Karen Romero, who lives with her husband in Sargent, said it was the most rain she had had in her neighborhood in her nine years living there. 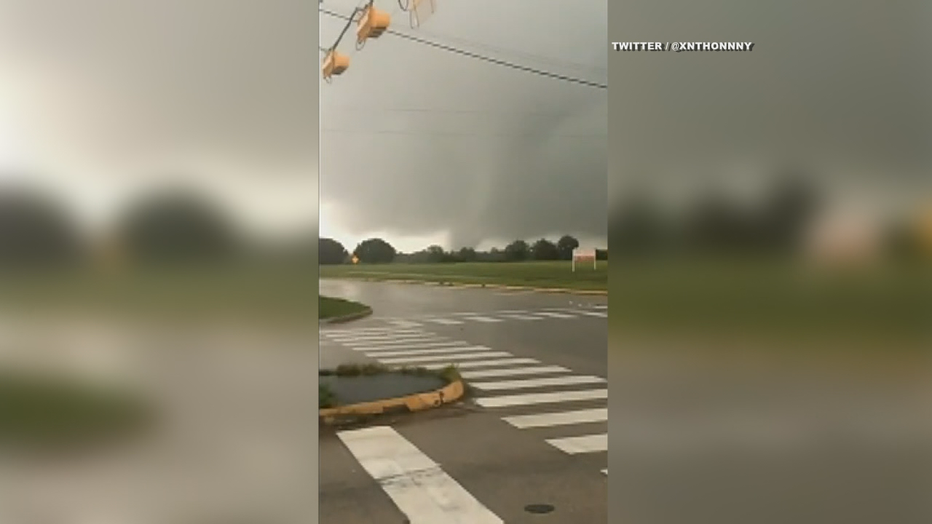 The National Hurricane Center said Imelda weakened to a tropical depression after making landfall as a tropical storm Tuesday near Freeport, Texas, with maximum sustained winds of 40 mph.

The flooding from Imelda came as Hurricane Humberto blew off rooftops and toppled trees in the British Atlantic island of Bermuda, and Hurricane Jerry was expected to move to the northern Leeward Islands on Friday and north of Puerto Rico on Saturday.