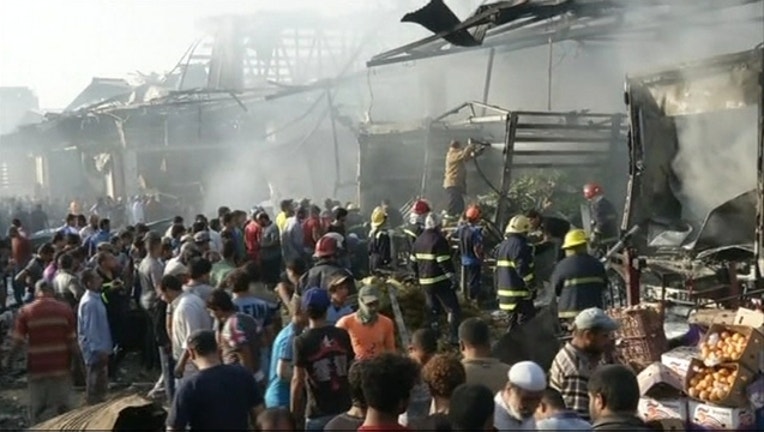 They said the bomber drove his explosives-laden vehicle into the advancing troops north of Anbar's provincial capital, Ramadi, killing the two generals and three soldiers. A military spokesman said on state television that 10 other soldiers were wounded. The officials spoke on condition of anonymity because they were not authorized to speak to the media.

The IS group captured Ramadi in May and also controls the nearby city of Fallujah.

A military statement read on Iraqi state television identified the two generals as Maj. Gen. Abdul-Rahman Abu-Regheef, deputy chief of operations in Anbar, and Brig. Gen. Sefeen Abdul-Maguid, commander of the 10th Army Division. The two were later given a military funeral at the Defense Ministry in Baghdad with Prime Minister Haider al-Abadi and Defense Minister Khaled al-Obeidi leading mourners.

An IS statement posted on Twitter accounts run by supporters claimed responsibility for the attack, but gave a different account, saying six fighters in four explosives-laden vehicles and armed with two heavy machine-guns carried out the attack.

Tens of soldiers were killed, including the two generals, it said without giving precise figures. The operation was designed to avenge the killing of a local commander in Anbar it identified as Abu Radi al-Ansari.

The Associated Press could not immediately verify the authenticity of the statement, but its language and phrasing is consistent with past IS claims of responsibility.

In neighboring Syria, meanwhile, IS militants seized five villages from rebel groups in the north as part of an advance toward the strategic town of Marea near the Turkish border. The Syrian Observatory for Human Rights and other activist groups said the IS carried out a suicide bombing on the outskirts of Marea amid fierce fighting in the area.

The Turkish Dogan news agency also reported renewed fighting between IS and rebels across the border from Kilis and said the U.S.-led coalition bombed IS targets in the region. Dogan video footage showed a large plume of smoke rising from across the border.

The IS advance is in the northern countryside of Aleppo province, near the area where Turkey and the United States have agreed to establish an IS-free safe zone.

Iraq's government forces and allied Sunni and Shiite militiamen have been battling IS militants in Anbar for months but have only made modest gains against the group in the vast province that stretches west of Baghdad.

Speaking on state television, military spokesman Brig. Gen. Yahya al-Zobeidi sought to play down the psychological effect of the loss of the two generals. "We will not stop our operations and we will continue to advance," he said.

The IS group controls about a third of Iraq and Syria. A U.S.-led coalition has been staging airstrikes against IS positions in both countries over the past year.

Government forces and allied militiamen are coming under mounting pressure from IS militants in the oil refinery town of Beiji, north of Baghdad. Government forces retook Beiji late last year, but the IS militants are on the offensive there again and now control about half of the town and the refinery.

Al-Abadi said this week that winning the ongoing battle over Beiji is key to defeating the IS group in Iraq.