Irving police say&nbsp;they are&nbsp;investigating at least one incident of violent hate mail sent to a resident.

IRVING, Texas - Irving police say they are investigating at least one incident of violent hate mail sent to a resident.

The mail warns people who are Chinese or Indian Americans to leave the country or be shot.

The department says if there are more complaints then the FBI may get involved.

At this point, Irving police say it appears to be an isolated incident.

The letter was sent to a person from Indian descent, but a specific name was not included in the letter. Detectives are working with U.S. postal inspectors to try and figure out who sent it. 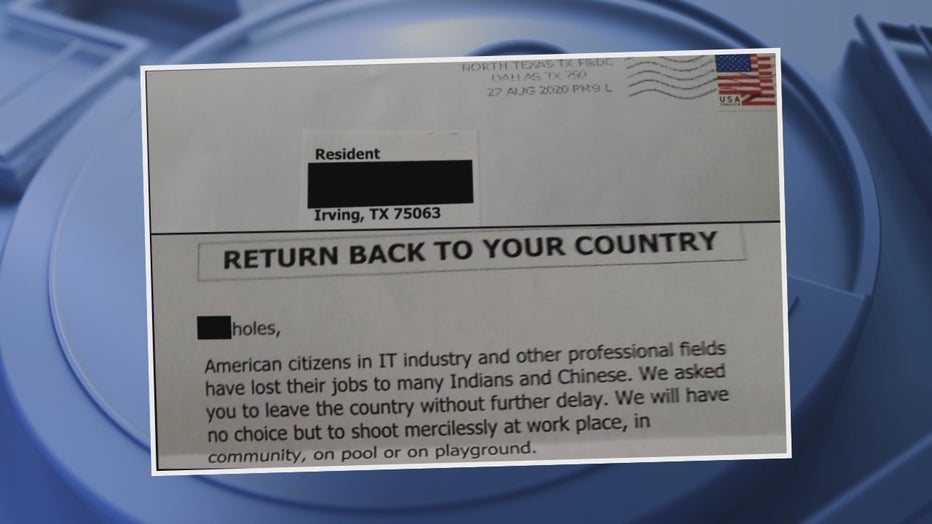 Irving police detectives are fielding calls from the community Tuesday after a hate-filled letter was sent to a resident from Indian descent.

“The letter definitely had some hatred type of remarks and also some very threatening violent action to take place at places like playgrounds and pools that was definitely very alarming to us,” said Irving Police Officer Robert Reeves.

In the letter titled "Return Back to Your Country,” the author claims American citizens in the IT industry and other professions have lost jobs “to many Indians and Chinese."

The letter was sent to an apartment off Ranchview Drive over the weekend. It was not addressed to a particular person but was sent to a specific unit.

The Irving chapter of the Indian American Muslim Council joined other faith leaders in a virtual news conference hosted by CAIR DFW on Tuesday condemning the author's actions.

“We wish to reiterate that we are peaceful hardworking citizens, and we are committed to a stable and prosperous America,” said Azzam Shaih, with the Indian American Muslim Council.

Irving police say this appears to be an isolated incident. Investigators issued a community alert on social media. If additional letters turn up, Irving police say only then might the FBI might become involved in the investigation.

“Part of the investigation is talking to the complainant finding out if they've had any disagreements with anyone recently,” Reeves said.

Detectives are working with U.S. postal inspectors trying to figure out where the letter came from.

“My family has been in America for over 50 years and we had people just graduate from Yale, Harvard,” Shaih said. “And so, we're just an integral part of this society and this is our home.”

The author of the letter could face a charge of harassment.

If anyone else has received one of the letters, they are asked to call Irving police.