'How is this OK?': Desk of boy with autism moved into bathroom of school by teacher, mom says

It was a horrifying revelation for a mother in Washington when she found out her 11-year-old son with special needs had his desk moved into the bathroom by a teacher.

BELLINGHAM, Wash. - It was a horrifying revelation for a mother in Washington when she found out her 11-year-old son with special needs had his desk moved into the bathroom by a teacher.

Danielle Goodwin posted a picture on her Facebook page of her son, Lucas’, desk inside the school bathroom. She said the teacher’s solution for finding a quiet place for Lucas to study was to put him and his desk in a bathroom crowded between the toilet and the sink.

She wrote that when she asked his teacher if he could study in the library, she said no, saying the bathroom was fine because they “don’t use it as a bathroom.”

“My son was humiliated, embarrassed, and disgusted at this inhumane suggestion that he work in a bathroom,” posted Goodwin.

She told KCPQ that Lucas has autism and gets triggered by loud noises which requires him to be in quiet places at times, adding that they have never had issues with the district accommodating his needs before, but now he feels scared.

She added that she decided to take her son home that day and added that he wouldn’t be returning to Whatcom Middle School again.

“When we got home he was throwing up from the anxiety,” she added. “How is this best practice? How is this OK?”

The school district told KCPQ that they received the complaint on Thursday and are currently looking into the matter, saying they had no previous knowledge of the bathrooms ever being used as a “quiet learning space” before.

Goodwin told KCPQ that her son was also given a napping mat and alleged that he was expected to sleep on the bathroom floor. 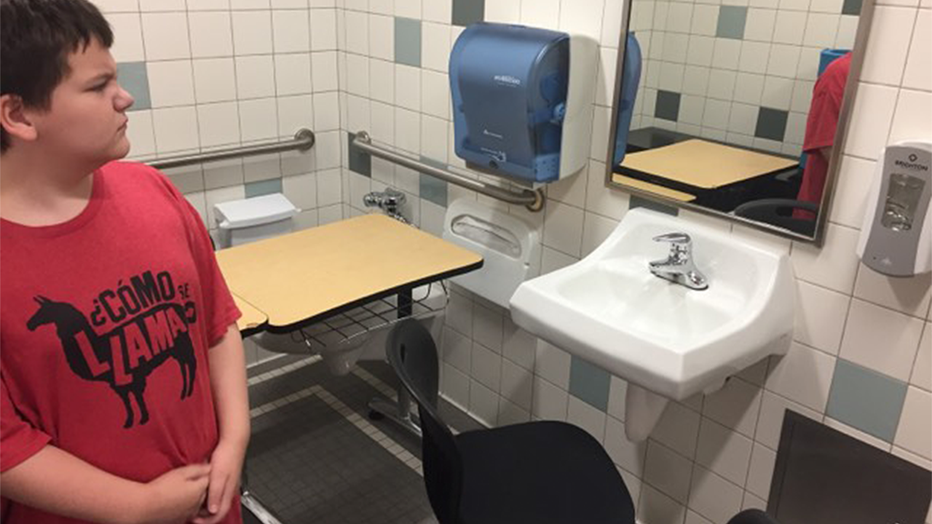 Danielle Goodwin photographed her son who she says was sent to the school's bathroom to study.