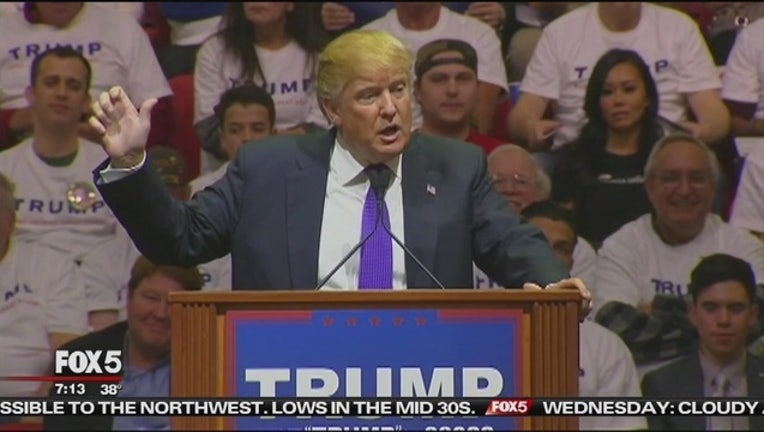 NEW YORK (AP) — After several difficult weeks that have called into question his front-runner standing, Donald Trump has arrived in friendlier territory: his home state of New York.

Polls show Trump with a commanding lead in a state that is likely to play a major role in determining whether the billionaire businessman can clinch the Republican presidential nomination before this summer's national convention. And his team has been touting a campaign reboot, including a new laser focus on racking up delegates.

On Wednesday, they announced that campaign veteran Rick Wiley would be joining the team as national political director. And Trump appeared to take a step toward thawing the chilly standoff with Fox News Channel's Megyn Kelly, meeting with her Trump Tower.

But Trump is also facing a strong challenge from rivals who are working strategically to deny Trump delegates anywhere they can. And he does not appear to be doing all he can, despite the high stakes of the contest.

New York uses a complicated electoral system in which a candidate must win an overall majority of votes statewide as well as in each of the state's congressional districts to walk away with all of its 95 delegates. That means that votes in GOP deserts like Brooklyn and the Bronx are arguably even more valuable than in Republican-rich counties like Nassau and Suffolk.

Spokeswoman Hope Hicks says the campaign has been busy door-knocking, phone-banking and holding rallies. Trump has "a huge group of influential people in NY supporting our candidacy with their local GOP committees," she said in an email. "We see an opportunity to shut out Governor Kasich and Senator Cruz in the entire state of NY."

But the campaign has made some curious decisions. It chose not to bring in a specialized paid state director, as it just did in California. Instead, its Northeast regional political director, Michael Rubino, who also led the campaign's Virginia efforts, is serving as acting state director.

Trump has also scaled back his public schedule, holding just four rallies to date. He has not stormed local news shows or editorial boards and has yet to air any television commercials here, according to ad tracker Kantar Media CMAG. Still, he is spending about $85,000 on radio spots, and his rivals, Texas Sen. Ted Cruz and Ohio Gov. John Kasich, have also largely forgone television ads.

And Trump has several key advantages. In addition to being a near-lifelong resident and the developer of properties across the state, he has been embraced by large segments of a state's GOP establishment for the first time in the campaign.

Trump has been endorsed by party leaders in all of the state's 27 congressional districts, a big organizing boost.

Rep. Chris Collins, one of the campaign's three honorary co-chairs in the state, says much of the New York effort has centered on Republican Party committee members. He said he was unaware of any paid staff members or official campaign offices aside from the campaign's Manhattan headquarters. Instead, he said staff had been working out of local GOP offices across the state.

"You could say that the apparatus of the local committees is being put at his disposal," he said, predicting that Trump would emerge with all 95 of the state's delegates.

At a rally in Albany on Monday, supporters were invited to phone bank in Trump's local headquarters, which is being run out of the Albany County Republican Committee headquarters, a nondescript office on the outskirts of town.

Carl Paladino, a builder and former gubernatorial candidate who is another honorary co-chair, sent out an email Wednesday advertising the "WNY Trump Headquarters Opening!" in the Buffalo building where he works.

Volunteer Branden Leque, 21, a sophomore at SUNY-Oneonta, said he got involved with the campaign in New Hampshire and is now making about 100 phone calls a day on Trump's behalf, either from the office or his dorm room.

But Trump's rivals have been eying openings.

Kasich, for instance, has six paid staffers in the state and offices in the Hudson Valley and on Long Island. His team is also organizing "pop up" offices throughout Upstate New York and has organized a heavy volunteer effort including door knocking on Long Island and in Buffalo, regional political director Scott Blake said.

The campaign is focusing on picking up delegates in targeted congressional districts such as the 20th, in the capital region, and the 24th, near Syracuse. Kasich has campaigned in Albany, Troy and Saratoga and spent the weekend in Syracuse, Rochester and Westchester County.

Cruz has spent less time in the state, focusing on peeling away delegates both upstate and in the Bronx and Brooklyn, where he campaigned last week.

The senator's best-case scenario is to win about 35 of the state's 95 delegates, said Russ Gugino, a longtime Republican strategist in New York who is volunteering for the Texas senator's campaign.

"Any delegates he picks up is gravy at this point," Gugino said.

Ed Cox, the state chairman of New York State GOP who has remained neutral in the race, argued that an effective ground game "isn't the important thing" for Trump in the state.

"It's about getting his message out to voters in his style of large meetings," Cox said. "That's working for him here."