It is still graduation season in North Texas after some districts pushed back ceremonies in order to make a modified in-person event work in the time of COVID-19.

ARLINGTON, Texas - Even though it’s June, it is still graduation season in North Texas after some districts pushed back ceremonies in order to make a modified in-person event work in the time of COVID-19.

This has forced them to come up with other options to recognize seniors.

It wasn’t the typical graduation ceremony some high school seniors had in mind, as they walked across a ballpark to get their diploma.

But graduates are just thankful they got that moment.

“I feel like I got to experience something that my brothers got to experience, that I was afraid that I wasn’t going to get to because of the pandemic,” Crossroads High School graduate Kesslie McCormick said. “So, I don’t know. That was exciting for me honestly.”

But then an opportunity arose the district couldn't refuse: to hold in-person commencement ceremonies at Globe Life Field.

"They lost so much this spring,” Burleson ISD Chief of Schools Coby Kirkpatrick said. “It was a no brainer to come in and say we're doing this."

Each wore a mask that donned their school colors.

"I was able to succeed in getting through school and everything. It's just a good feeling, you know," Crossroads HS graduate Tyrion Ossai said.

Irving ISD was the first of 49 graduations at Globe Life Field that will take place this month.

It was also the first event for the new ballpark since the Texas Rangers were unable to start the season and concerts were postponed.

It still brought cheers from the stands.

"I was super excited and my dad, I think my dad was the one that screamed out, thank God," said Candice McCormick, whose sister graduated.

Arlington ISD went with a different venue, AT&T Stadium, the home of the Dallas Cowboys. 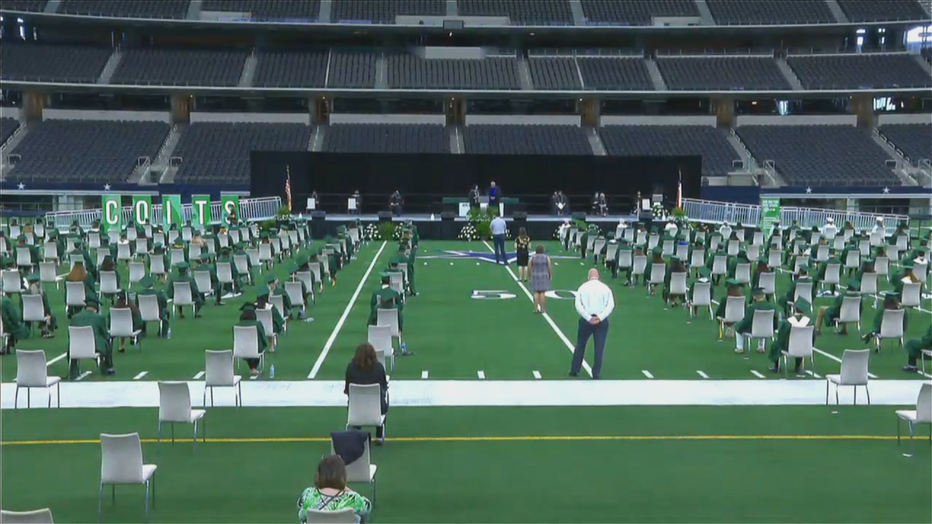 The stadium’s convertible roof makes it an outdoor venue.

The district started things off focusing on racial injustice, by holding a moment of silence for all victims.

United, although social distancing requirements were still in place.

Families might have been spaced apart, but they were physically there to witness one of the biggest moments in their seniors' life.

"There's no words because I wasn't able to graduate so I feel blessed, and that I was here to see him. There's a lot of moms and dads that don’t get to see it, so I’m just thankful that I did and I’m so proud of him. Couldn't be prouder," one mom said.

With school districts having to push back graduation dates, most students said they are more than happy to wait in order to have one in person.

One graduation that was held Saturday had an issue, as heat proved too much to handle for some people attending Princeton ISD's high school graduation outside.

At least two adults reported having heat exhaustion, and then more than a dozen others reported they weren't feeling well.

Police said only one person was taken to get checked out.

Cooling stations were set up and the district put two ambulances on standby for the second half of the ceremony.