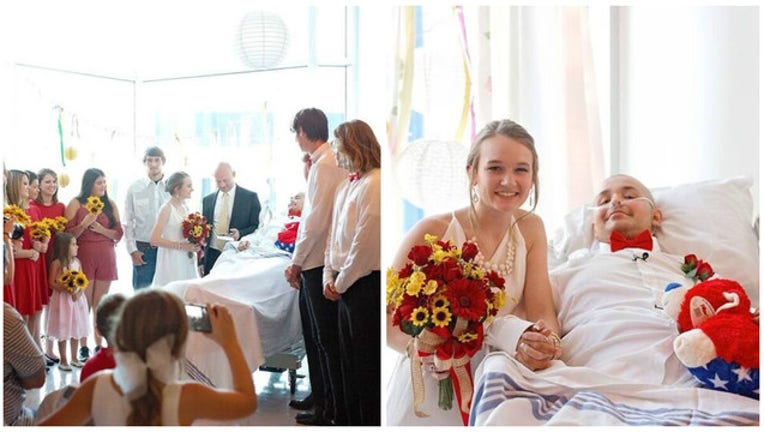 High school sweethearts Abbi Ruicker and Swift Myers were married at St. Francis Children's Hospital, as their family and friends watched the emotional ceremony. The pair had been dating for two years.

Swift has battled Ewings Sarcoma off and on since he was in the 7th grade. This is his seventh time battling the disease.

Swift knew Abbi was the love of his life and wanted to marry her. He proposed and she said yes.

According to Pen Weddings, it was a whirlwind of wedding planning and just two days later, the pair was wed. Hospital staff helped pull everything together including decorating the lobby, finding a wedding photographer, videographer and of course a cake.

Friends of the couple, who couldn't gain access to the hospital, showed their support by sitting on the sidewalk outside of a hospital window.

The ceremony was beautiful with a joyful message. "I love the simplicity of the marriage ceremony, At the center of the pomp and the pageantry it's really about two people in the presence of God and the witness of the significant people of their lives making vows to one another. For centuries we as humanity have been getting married to each other in different circumstances in different places. And one of the things that's powerful about having a relationship with God and knowing God is that our circumstances, good or bad, don't have to define us. That in the middle of tough times - in the middle of times that don't seem joyful we can still have joy. In the middle of times that aren't peaceful, we can have peace. Joy comes in knowing we are not alone." said the officiant.

Abbi was all smiles as the couple exchanged vows. She knelt over his hospital bed for their first kiss as husband and wife, as the crowd cheered.

Kenra Pryor Roulet has been Swift's teacher for three years. She says  "They are truly a remarkable and yet, very humble couple of kids! So proud of them!"