Grapevine holds its traditional Parade of Lights without restrictions

After doing a "reverse parade" last year where the visitors drove and the floats stayed still, Grapevine held its annual Parade of Lights with everything back in full force.

GRAPEVINE. Texas - After doing a "reverse parade" last year where the visitors drove and the floats stayed still, Grapevine held its annual Parade of Lights with everything back in full force.

Main Street was packed with visitors Thursday, which was a welcome sight for business owners who lost out last year.

Styrofoam snow and a cool 68 degrees was the perfect backdrop for Grapevine’s 41st annual Parade of Lights.

"I’m alright. I’m enjoying it. I’m glad to be out, having fun," said Katrice Hall.

It’s known for its hodgepodge of local participants riding down Main Street in trailers, tractors and trucks.

Everyone is decked out in their brightest and flashiest holiday outfits. 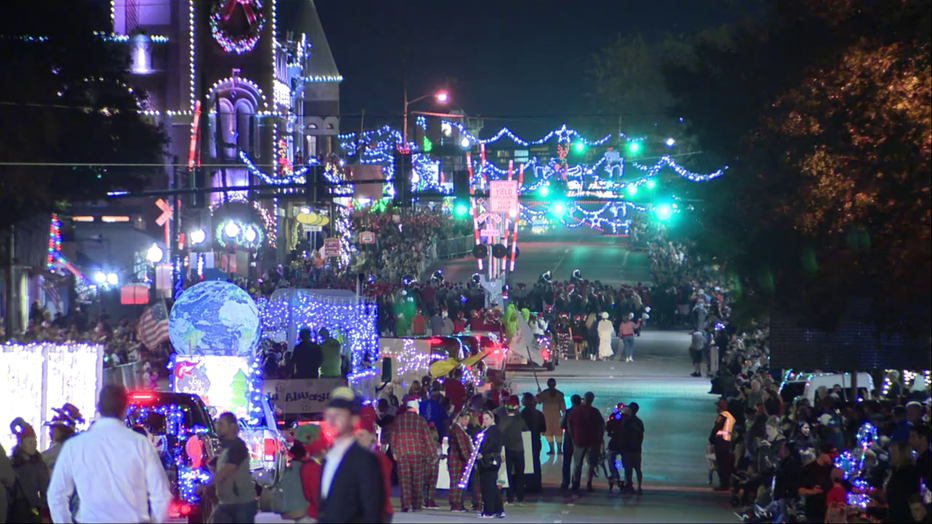 This year’s theme was a storybook Christmas.

Participants did not disappoint.

There was everything from a smiling Grinch to the Polar Express to the cast of the Nutcracker and Jack Skellington from the Nightmare Before Christmas.

Mayors and city council members from grapevine and Colleyville joined in.

Some arrived hours early to stake out their spots on the sidewalk.

After more than a decade of being in the parade, this year marks Janelle Foley’s first time as a spectator.

"I was like I think I like being in it more because at least I have a reason for being here early rather than just sitting around. But it’ll be nice to see everything for once," she said.

Last year, the pandemic forced organizers to hold a reverse parade, where the floats stayed still, and the cars rode along to watch.

This year, the floats are back on the move. However, COVID is still a concern less than a week after the World Health Organization named the latest omicron variant.

"Some of our older citizens may choose to not come," said Radonna Hessel, CEO of the Grapevine Chamber of Commerce. "But I think for those with families, they do feel it’s safe outside. People can spread out. We’ve seen a few with masks, people staying a little bit farther away from each other."

"We’re here to live our life and have fun," Foley said.