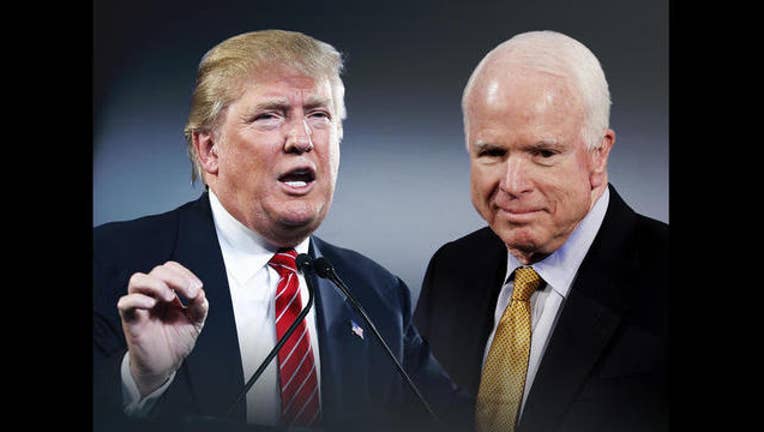 Speaking at a conference of religious conservatives in Iowa, Trump was pressed on his recent description of the 2008 Republican presidential nominee as "a dummy."

McCain served as a Navy pilot during the Vietnam War. He was captured after his plane was shot down and was held more than five years as a prisoner of war. The moderator, Republican pollster Frank Luntz, described McCain as "a war hero."

Trump said McCain "is a war hero because he was captured. I like people who weren't captured." The comment drew some boos from the audience.

During a news conference after his appearance, Trump did not apologize but sought to clarify his remarks.

"If a person is captured, they're a hero as far as I'm concerned. ... But you have to do other things also," Trump said. "I don't like the job John McCain is doing in the Senate because he is not taking care of our veterans."

A spokesman for McCain, Brian Rogers, said no comment when asked about Trumps remarks.

Trump said he avoided service in the Vietnam War through student and medical deferments, adding that he did not serve because he "was not a big fan of the Vietnam war. I wasn't a protester, but the Vietnam war was a disaster for our country."

The comments about McCain drew rapid criticism from other 2016 hopefuls. In a statement, former Texas Gov. Rick Perry said the remarks make Trump "unfit to be commander-in-chief." Former Florida Gov. Jeb Bush tweeted: "Enough with the slanderous attacks. (at)Senator John McCain and all our veterans -- particularly POWs have earned our respect and admiration."

Texas Sen. Ted Cruz called McCain an American war hero, but sidestepped when asked whether he would condemn the remarks.

"I recognize that folks in the press love to see Republican on Republican violence," Cruz said. "You want me to say something bad about Donald Trump or bad about John McCain or bad about anyone else and I'm not going to do it."

Trump was among 10 GOP presidential candidates on Saturday's program for the Family Leader Summit.