A pair of dogs were dumped on the side of a road Thursday evening.

Women saw the dogs were in trouble, and flagged down police to help catch them.

It took a few treats, but the pups were coaxed into a police car after about half an hour, but the person who dumped them has not yet been found.

The dogs are still under observation at Arlington Animal Services, which is less than a mile and half from where the dogs were found.

Police were able to save them from a busy intersection and bring them there with the help of some very concerned citizens.

“Well, they kept going in and out, like trying to run this way, and we kept trying to herd them back over here and try to get them over this way,” Brandy Beasley recalled.

Beasley and Melissa Anderson were on their way to a Thursday night dinner in Arlington, when they saw the two furry faces frantically running around the intersection of Center and Bardin Road. 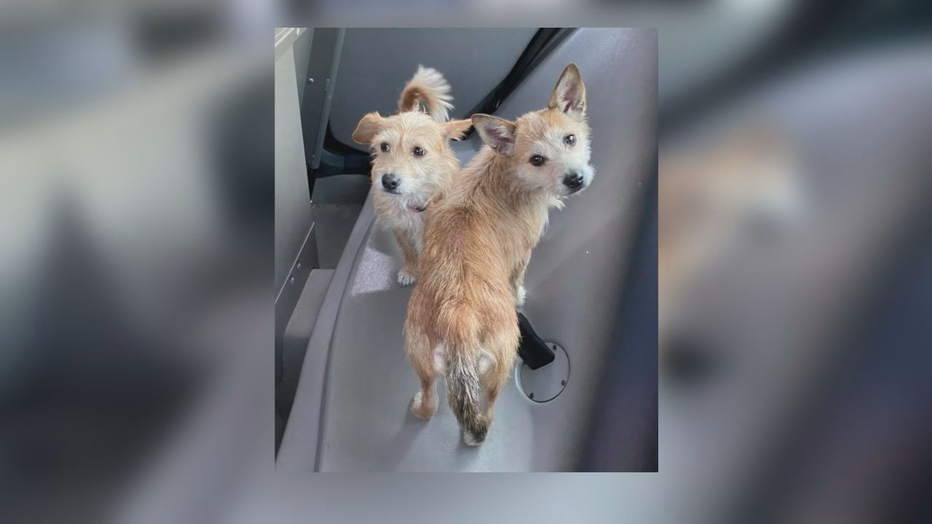 “They were really scared and they wouldn’t come to us,” Beasley said.

They noticed a woman trying to lure the dogs away from traffic.

“She was like, ‘I can’t believe someone just dropped these off in front of me,’” Anderson said.

The woman told Arlington police that she saw a driver stop, open the door, dump the dogs, and then leave.

“I had seen a car driving off,” Beasley recalled.

“I just kind of bent down and just kept trying to talk to it real gently and everything,” Anderson said.

Arlington Police Department Lt. Chris Cook happened to be driving by, saw several cars pulled over, and thought there was a wreck.

Then he saw the dogs.

“I asked, ‘Does anybody have any dog treats?’ And a woman said, ‘I have some Sun Chips,’” Cook recalled. “Throws these Sun Chips. The dogs kind of come over to them, sniff the chips, go back under the car.”

But everything changed when Officer Brandon Evans arrived as backup, and had some sausage sticks.

With three dogs of their own, Anderson and Beasley couldn’t help but think the worst about what could have happened to the pups if they hadn’t pulled over.

“It’s just heartbreaking that somebody can just do that and have the gall to do that right in front of everybody,” they said.

Police said abandoning an animal is a misdemeanor criminal offense.

There's only a vague description of the driver who dumped the dogs, and the witness wasn't able to get a license plate number.

The dogs are currently under observation to determine whether they will be put up for adoption or transferred to a certified animal rescue.