What is the Ghost Army?

The Ghost Army refers to a secret unit that used inflatable equipment, sound effects, radio trickery, and other deceptions to draw enemy forces away from American units, saving an estimated 30,000 lives.

"What an honor," 98-year-old Ghost Army veteran Bernie Bluestein, told the Ghost Army Legacy Project. "I never in my lifetime expected anything like this, it completely blasts me. I’m just sorry that there are not more of my fellow soldiers still alive that can be enjoying this as much as I do."

The Ghost Army refers to two units that used inflatable equipment, sound effects, radio trickery, and other deceptions to draw enemy forces away from American units, saving an estimated 30,000 lives. Because of their secret classification, members were not recognized for their heroism.

The elite group, known officially as the 23rd Headquarters Special Troops, risked their lives to draw fire away from fellow soldiers involved in the actual fighting, the Washington Times reported. 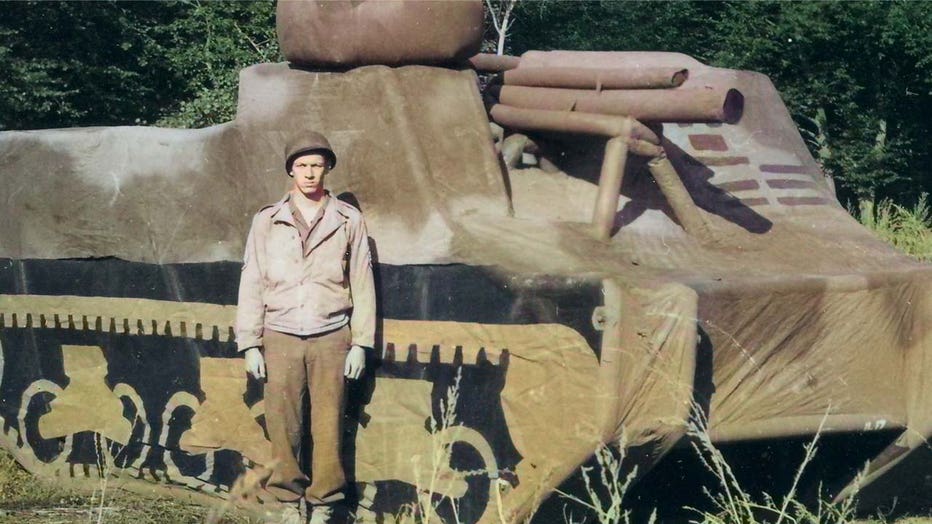 FILE - A member of the 603rd stands in front of an inflatable tank destroyer. (Rick Beyer)

The Ghost Army consisted of 82 officers and 1,023 men who were under the command of Army veteran Col. Harry L. Reeder.

The unit was created by Col. Billy Harris and Maj. Ralph Ingersoll, both American military planners, who put together a curated group of "artists, engineers, professional soldiers, and draftees, including famed artists such as fashion designer Bill Blass, painter Ellsworth Kelly, and photographer Art Kane," according to the National World War II Museum website.

"Many West Point graduates and former Army Specialized Training Program participants were assigned to the 23rd, and it was said to have one of the highest IQs in the Army with an average of 119," the website continued.

The Ghost Army staged more than 20 deception operations in France, Belgium, Luxembourg and Germany, according to the Ghost Army Legacy Project website.

"Its complement was more theatrical than military," the website stated. "It was like a traveling road show that went up and down the front lines impersonating the real fighting outfits."

Once the war was over, members of the Ghost Army were sworn to secrecy and records were kept classified up until the mid-1990s.

"It is finally time that the American people recognize their ingenuity and selflessness which saved countless American and Allied lives," Rep. Peter King (R-N.Y.) said. "They deserve their due."

The "American Sniper" team, including actor Bradley Cooper, director Todd Phillips and producer Todd Philips, is currently working on a movie about the Ghost Army for Hollywood, the Times reported.

As of publication, nine reported surviving members of the Ghost Army include:

Congressional Gold Medals have gone to previous unsung World War II units including The Doolittle Raiders, The Monuments Men, Women Air Service Pilots and the Native American Code talkers, according to The Times.

FOX News contributed to this report. This story was reported out of Los Angeles.