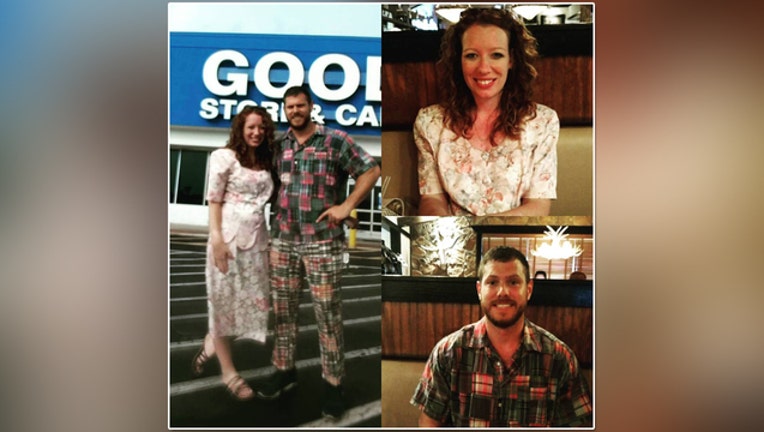 Noel Pauley says that now that she and her husband, Shane, have a baby girl, they try to be intentional about date nights and go out once a week to focus on their marriage.

On this particular date night, they decided on a "Goodwill Date Night," for which they made up some rules.

Each of them got $10 to spend on each others' outfits from the thrift store and they made each other try them on. "This cued the insane laughter from the start of the date night," said Pauley on her blog, "Baby Bows and Bullets, which chronicles her life married to an outdoorsman and mother of a "fiery, little redheaded girl."

Whatever outfit they chose for each other was what they wore for the date night. Shane chose a nice, long, floral number for his wife and Noel chose a variety of mismatched plaids for her husband's date-night wear.

The grand total of the date night couture was actually $13.

The next rule was like "Fight Club," she wrote. Once they left Goodwill, they were not to speak of their outfits. They were to own the look for the rest of the night. "We had to resume date night as normal and pretend like we had no idea our outfits were off the wall," Pauley wrote. They went to Longhorn Steakhouse for dinner where Pauley says she felt some eyes on them. "Everyone just looked and laughed behind our backs I'm sure," she said, but they put on their game faces.

For a little extra fun, the couple made up fake names for each other and stuck with them for the rest of the night. Noel was "Ethel" and Shane was "Roger," because "really, who wears more plaid than a 'Roger,'" she wrote.

After her Facebook post with their photos went viral with more than 400,000 shares, the server the couple at the steakhouse even reached out to her. "I just wanted to say how awesome I thought y'all were," the server wrote. "The outfits were perfect and I just might try out this date with my other half," she wrote.

The couple has also had their share of naysayers to which Pauley responded: "If you are offended because we picked out crazy outfits at the Goodwill, I'm sorry. Just take a minute to laugh at how crazy we look in mismatched, wrong sized clothes."

In the end, she hopes other couples consider getting a good laugh at themselves, too, with their own #goodwilldatenight, and she encourages them to take pictures and post about it.

It was a date night, and a message, that clearly resonated with other couples.

"Y'all, I don't think we have laughed this hard in a long time. Marriage is tough, parenting is tough, and honestly life is tough. But everything is better when you're doing it with your best friend," she wrote.