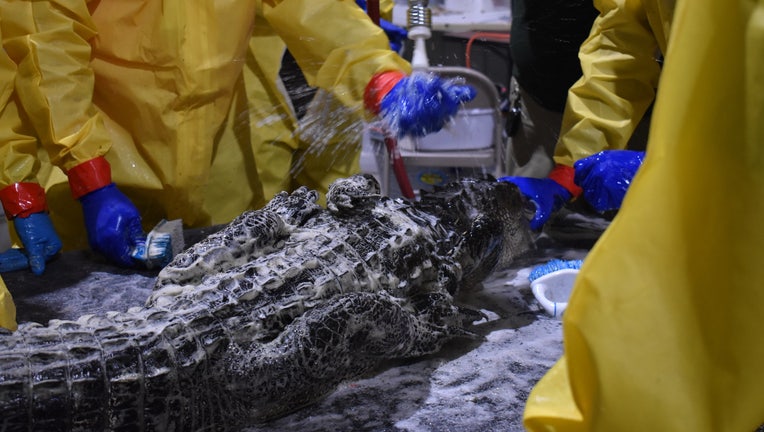 In this photo provided by the Louisiana Department of Wildlife and Fisheries to Fox Television Stations, a 6-foot alligator is washed, Thursday, Jan. 13, 2022, at a wildlife rehabilitation facility set up after 300,000 gallons of diesel fuel poured o

NEW ORLEANS - Wildlife rehabilitators are decontaminating dozens of alligators, brushing their pointy teeth and scrubbing their scaly hides in the weeks after a pipeline rupture dumped 300,000 gallons of diesel fuel into a New Orleans area wetland.

Diesel poured into the area outside the New Orleans suburb of Chalmette on Dec. 27 after a severely corroded pipeline broke, according to federal records.

Seventy-eight alligators have since been rescued, and 33 of them had been cleaned and released by Friday into a national wildlife refuge located in New Orleans and about 10 miles from the spill site in St. Bernard Parish, the Louisiana Department of Wildlife and Fisheries said.

Cleaning a six-foot-long alligator on Thursday required eight people: four holders, two scrubbers, one person with a hose for hot-water rinses and one to change the wash water, said Laura Carver, who became the department's oil spill coordinator in February 2010, less than three months before a massive BP oil spill off Louisiana in the Gulf.

Carver said the impact of December's diesel spill on wildlife was relatively high compared to most spills in Louisiana.

Rehabilitating that many alligators at once "is a new one for us," Carver said.

She said a hard piece of wood "almost like a really old-fashioned mop handle" is used to hold the alligator's jaw open while its teeth are scrubbed.

The teeth cleaning comes toward the end of a series of body washes using gradually smaller concentrations of Dawn dish detergent to clean off the gunk. "They literally get their mouths washed out with soap. But it’s the only thing that works," Carver said.

She said nearly all of the spill went into two artificial ponds, and only the smaller pond was completely covered with diesel.

The vast majority has been recovered from the ponds and contractors for operator Collins Pipeline Co. of Collins, Mississippi, are working on plans to deal with contaminated soil, Louisiana Department of Environmental Quality spokesman Gregory Langley said Friday.

Collins Pipeline, a subsidiary of New Jersey-Based PBF Energy, had known about corrosion on the outside of the pipe at the site of the spill since an Oct. 2020 inspection, according to federal records. However, it delayed repairs after a second inspection showed the corrosion was not bad enough to need immediate attention. At the time of the spill the company was awaiting permits for the work and planned to start it later this month, the records show.

The Gulf Coast is in constant danger of spills from corroded oil and gas pipelines, said Dustin Renaud, spokesman for the environmental nonprofit Healthy Gulf.

"It’s time we take a systematic approach to reviewing the vulnerability of our oil and gas infrastructure, and start the process of repairing and removing these rust buckets," he said in an email.

The spilled fuel killed about 2,300 fish in two pits from which dirt was once excavated for construction. Most were minnows and bait fish, Carver said, along with some shad, gar, sunfish and small bass.

Noise-making cannons have been set up in the area to keep birds and animals away, the federal records show.

Most of the alligators were brought in within two weeks of the spill, but seven were rescued this week, Carver said.

Although 23 live birds were found, only three survived the combination of diesel and cold weather, Carver said. She said two have been released and a third is still being treated.

The department euthanized three alligators more than 8 feet long, Carver said. They were in deep diesel and "in rough shape," she said.

Birds and smaller reptiles get their mouths swabbed out, often as they're captured or when they're brought in, Carver said.

RELATED: When do iguanas fall from trees in Florida?

Federal records show that Collins notified authorities the night of Dec. 27, within an hour after going to the site and nearly nine hours after shutting down the pipeline because meters indicated a likely break.

Langley had no comment about whether the department considers that time lapse a problem, noting the investigation is continuing.

"Once the investigation is complete, the department’s enforcement division may be asked whether any environmental regulations were broken," he wrote in an email Friday.

Langley said the Louisiana Oil Spill Coordinator’s Office is leading the state investigation. The office did not immediately return a call for comment Friday.

RELATED: ’Pollution is pollution’: How to reduce amount of algae-thriving nutrients in Bay Area waterways

Gators have to wait for their cleaning until all polluted food has made it through their digestive systems, Carver said.

Though the babies, all found near each other, shared a kiddie pool, each of the others has its own kiddie pool within a plywood enclosure.