ROWLETT, Texas - Garland police say it appears the man who hijacked a DART bus over the weekend and shot two officers before being killed by police wanted to kill officers.

Ramon Thomas Villagomez was wanted in South and Southeast Texas. He seemed ready for a shootout. Investigators found he had one gun, four clips and boxes of ammunition.

“Based on our investigation, we believe that the police were the focus of his shooting,” said Garland Police Lt. Pedro Barineau.

It was like a scene from a movie: a DART bus hijacked. It has never happened before that anyone can remember in North Texas.

The hijacker, Villagomez, rode the bus for an hour and a half Sunday morning like a typical passenger until 11:00 a.m. 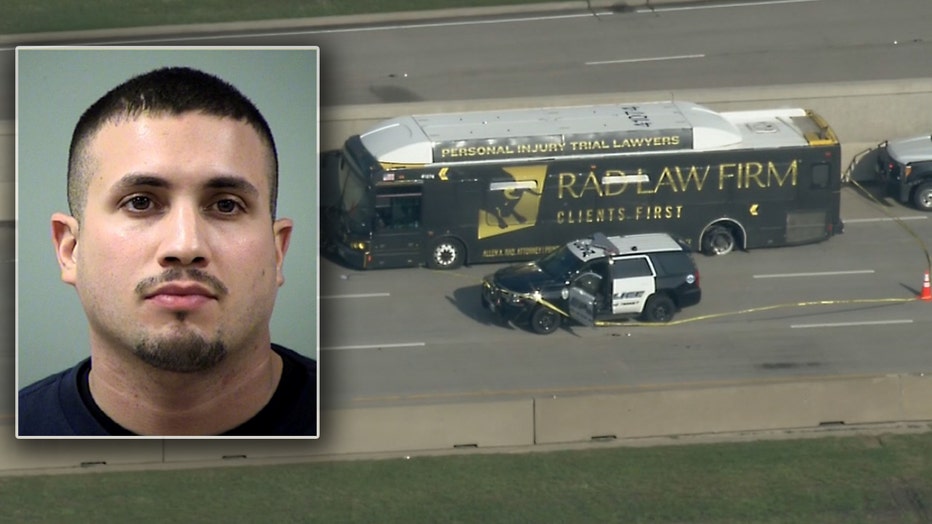 “Arrives at 5th Street Station in Garland. Only one passenger remains on the bus,” Barineau explained. “At that time, he took over the bus.”

The suspect, with a criminal history back to 2005, was killed in a shootout with officers after a winding pursuit through at least five cities. Along the way, police say he confessed to an assault in Brazoria County and a woman’s murder in San Antonio.

An armed suspect who hijacked a DART bus was killed in Rowlett Sunday after holding the bus driver at gunpoint and forcing them to flee from officers.

The bus operator was driving while Villagomez was shooting at officers.

“The gunman is continually firing at officers,” Barineau said. “At the time the bus is on Buckingham, the gunman shot a DART officer in the leg.”

Viewer video shows the bus running east on Highway 66 in Rowlett heading to Rockwall with a squad car cavalry chasing him.

Rockwall Officer Matt Joseph on patrol got the radio call to assist and deploy stop sticks as the chase was heading into his city. He did not know this would be a bus stop.

“I heard gunfire as he approached my location,” he recalled. “Myself and my cover officers took cover behind a concrete barrier and deployed the sticks. I really wasn’t a hundred percent sure I got good contact on it. Once the bus made the U-turn, we repositioned ourselves on the other side of the wall. We heard gunfire again as the bus passed. Then, the pursuing officers did what they did.”

The bus tires were spiked a second time by a Richardson police officer. The DART driver was forced to get on George Bush Turnpike, and a Garland officer was shot.

“Struck through the windshield in the front passenger seat. Left side of his neck,” Barineau said.

When the bus with shredded tires had to stop, the Villagomez jumped from a bus window while still firing at police.

“He’s engaged by our officers where shots are fired, and he’s struck and incapacitated,” Barineau said.

The DART and Garland officers missed serious injuries from their gunshot wounds. Both were treated at hospitals and have been released.

More than 70 rounds were fired at police by Villagomez.