‘Gains to America’: 1 third of US Nobel Prize winners in physics, chemistry, medicine are immigrants

Immigrants have been awarded 35 percent of the Nobel Prizes won by Americans in chemistry, medicine and physics since 1901, the National Foundation for American Policy reported in a policy brief released this year.

LOS ANGELES - Immigrants have been awarded 35 percent of the Nobel Prizes won by Americans in chemistry, medicine and physics since 1901, the National Foundation for American Policy reported in a policy brief released this year.

That makes a total of 105 out of the 302 Nobel Prizes awarded in the three science categories.

Since 1901, immigrants have been awarded 36 percent of the U.S. Nobel Prizes in physics, 35 percent in chemistry and 34 percent in medicine, the policy brief said.

“These numbers could be considered an underestimate, since they do not include Nobel Prize winners who immigrated to America after receiving a Nobel Prize,” the foundation said, citing Albert Einstein, Enrico Fermi and Niels Bohr. 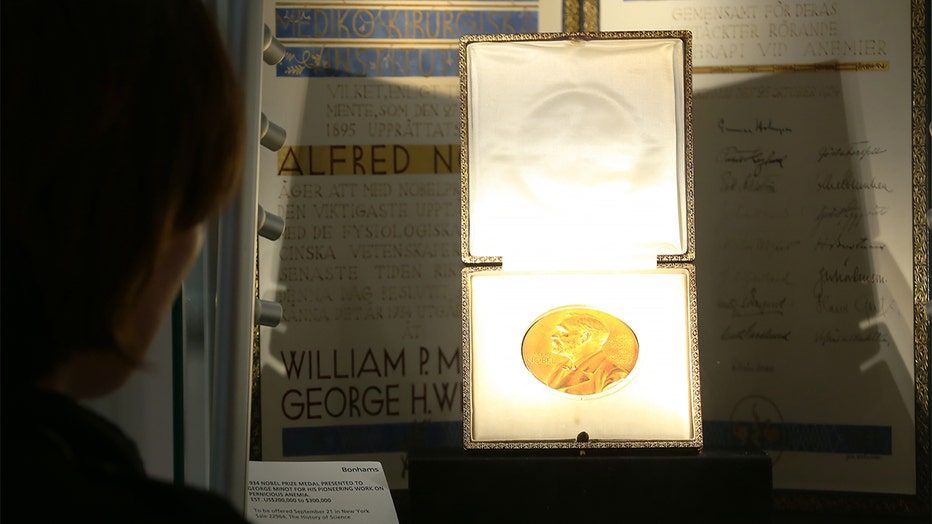 FILE: The Nobel Prize medal awarded to George Minot in 1934 for his work on the treatment of pernicious anaemia was to be sold at the Bonhams Hong Kong Saleroom, Aug. 25, 2015.

Donna Strickland, who shared a 2018 Nobel Prize in Physics with Gérard Mourou, is also not included as a U.S. recipient, the policy brief said, adding that the Canadian-born professor was an international student in the U.S. when she conducted her “groundbreaking research” and received a Ph.D. from the University of Rochester in New York.

“These achievements by immigrants point to the gains to America of welcoming talent from across the globe. The findings do not mean America should welcome only Nobel Prize winners. Such a policy would be quite restrictive. Moreover, most immigrant Nobel Prize winners enter the United States many years before being awarded this honor,” the foundation said.

The average age of Nobel Prize winners at the time of the award is 59.5 years, the policy brief said, citing economist Mark J. Perry.

“The right immigration laws matter, particularly in determining whether the United States gains from increased globalization and rising educational achievement in the world,” the foundation said.

The Immigration and Nationality Act of 1965 eliminated the discriminatory national origin quotas and opened the door to Asian immigrants, the NFAP said, adding that the Immigration Act of 1990 increased employment-based green card numbers.

“Those two pieces of legislation have been important factors in drawing international students to the country and enhancing the ability of America to assimilate talented individuals into our culture and economy,” the foundation said.

“The rise in immigrant Nobel Prize winners reflects an overall increase in the reputation and capability of American institutions and researchers post-1960, and a greater openness to immigration has helped make the United States the leading global destination for research in many different science and technology fields, including computers, cancer research and others.”