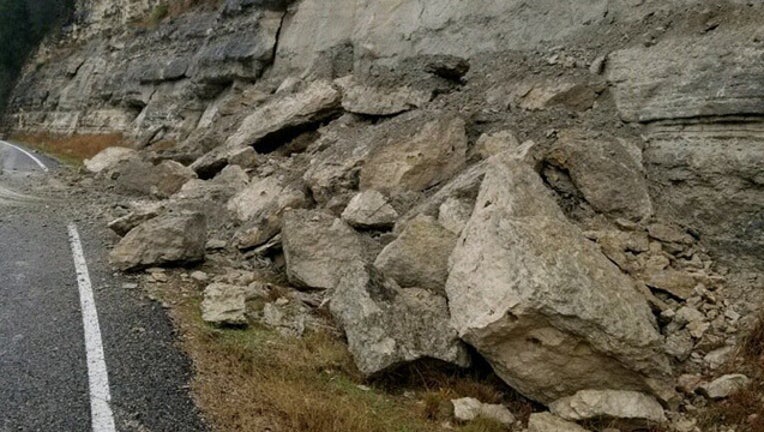 "TRAFFIC ALERT: The right lane of WB RM 2222, west of Paradox Cove, is closed to traffic due to falling rocks. Crews are in the process of clearing debris, but because of the ongoing rain the lane will not reopen immediately." (@TxDOTAustin)

Dozens of roads were closed due to flooding, rocks fell from a cliff on 2222 reducing traffic to one lane and a flood gate at Tom Miller Dam was partially opened.

Around 200 crossings were closed, according to ATX floods.

In the pouring rain, traffic westbound was reduced to one lane on 2222 near Paradox Cove as rocks fell from a nearby cliff. “I didn't know it had happened, I was just driving in and saw quite a big fall,” said Jeremy Hood the manager at County Line.

It took Hood nearly half an hour to drive a stretch of road which would take less than a minute.

“Everything was moving really slow because it was raining so hard you could tell something was going on,” said Hood. He works at a restaurant just past the cliff, he drives the stretch of road next to the cliff often and is no stranger to seeing rocks falls. “I’ve been working for the county line about 27 years and every now and then you'll see a few rocks fall here or there they might tumble down into the road but nothing like this. It's by far the biggest one I’ve ever seen,” said Hood.

TxDOT moved to clear the debris but the downpour prevented them from reopening the lane.

The rain not only caused problems in Austin but across other parts of Central Texas. Social media was flooded by agencies posting road closures due to flooding.

The amount of rain also prompted the LCRA to partially open a flood gate at the Tom Miller Dam.