One Frisco family is keeping their annual tradition of a massive lights display alive in the hopes it continues to bring people holiday cheer.

FRISCO, Texas - One Frisco family is keeping their annual tradition of a massive lights display alive in the hopes it continues to bring people holiday cheer.

[REPORTER: “Would you say this is a full-time job, keeping up all these lights?”]

Burkman’s family has been decorating for 20-years. It started with their, then 2-year old son, Alex.

“Christmas lights seemed to be his forte,” Jennifer said.

Alex was diagnosed with autism. Lights became a focus. He began his first display at the age of 9.

“Our first display that Alex did was about 500 lights and they were the incandescent lights,” his mother said. “So the original Christmas lights, and now we’re a bit over 70,000. 90% of that being LED.” 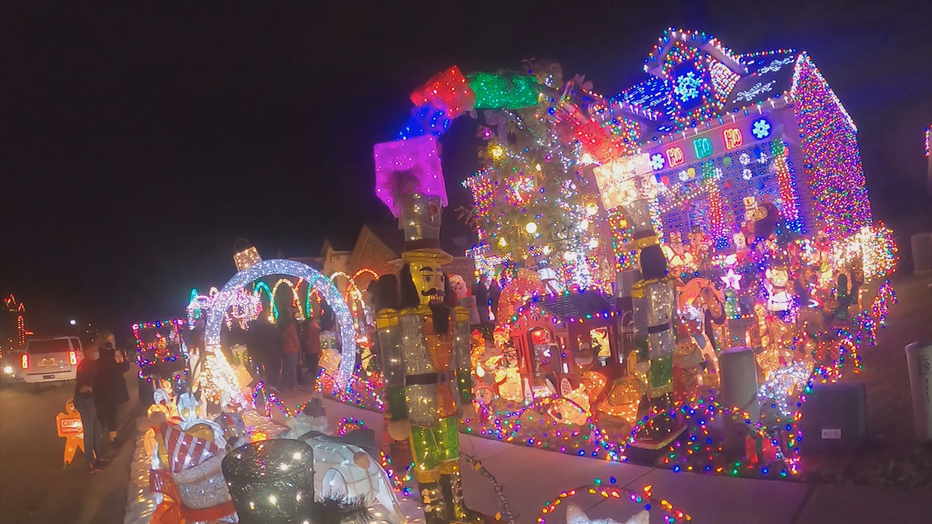 Alex, who is now 22, is a professional engineer.

“When he was 18 years old, he actually installed another panel in our garage and gave us more voltage,” Jennifer recalled.

People from across North Texas come to see their light display, but this is the first year Alex isn’t home. He took a job in Tennessee after college.

“We FaceTime probably every single night so he can look at the lights, and I know that was difficult for him,” his mom said.

“Nothing really comes close to the creativity and everything that we put into our display,” Alex said.

The display gives Alex a higher level of confidence. His mother said his story is inspiring others who live with autism.

“Yesterday, actually, I had a single mom come up to me and her son was just diagnosed on the spectrum, and to just have a conversation with her and let her know that it’s going to be OK,” Jennifer said. “She made me cry. I cried.”

The Burkman’s receive donations, which go to families of children with special needs, but the lights display is free for anyone to check out.

“So now, this is my way to let them have that moment, where they can’t afford, sometimes, to go sit on Santa’s lap at the mall, they can come visit Santa at our display,” Jennifer said.

The Burkman Holiday Home doesn’t keep track of how many people come out each season, but they do keep track of candy canes. Last year, they gave out 14,000 just to kids alone.

“Oh my goodness,” visitor Jacob Olsen said. “How much is their electricity bill?”

Well, since they’re mostly LED lights, the Burkmans said it’s not too high.

It takes six to eight weeks to set up the display, and two to three weeks to take it down.

One day, it could be Alex’s to keep.

“Well, you know, like at some point, I’ve got to inherit the display,” he said.

But his mom believes he can build a better one.

“I have no doubt that he’s going to do that and then he’ll rub it into my face that his is bigger and better,” Jennifer joked. “We’re a little competitive in this family.”

But for now, they’re happy this display brings holiday cheer.

“I challenge anybody that thinks they’re a Grinch to come here and not walk away smiling. They definitely will,” Jennifer said.

The display is at 3809 Hazelhurst Drive in Frisco, and will be up until December 31.