The highest-ranking general in the National Guard recently went to Fort Worth to say thank you.

FORT WORTH, Texas - The National Guard has been deployed to help the Tarrant Area Food Bank meet the unprecedented need for food during the economic crisis caused by the coronavirus pandemic.

The highest-ranking general in the National Guard recently went to Fort Worth to say thank you.

The TAFB says the need has grown more than 80 percent since before the pandemic. Through its many parts over multiple counties, it says it's delivering one million meals per week.

The National Guard in Fort Worth has for weeks been assisting the TAFB at a time of unprecedented need. Wednesday afternoon in Fort Worth, the TAFB got a special thank you visit from Four-Star General Joseph Lengyel.

As the highest-ranking general in the National Guard, Lengyel spent the last few weeks touring various sites across the country as National Guard personnel sort, pack and prepare food for distribution to more than 300 partners across 13 counties.

“We’re that unique part of the military who can be called to duty by the president and the governor,” he said. 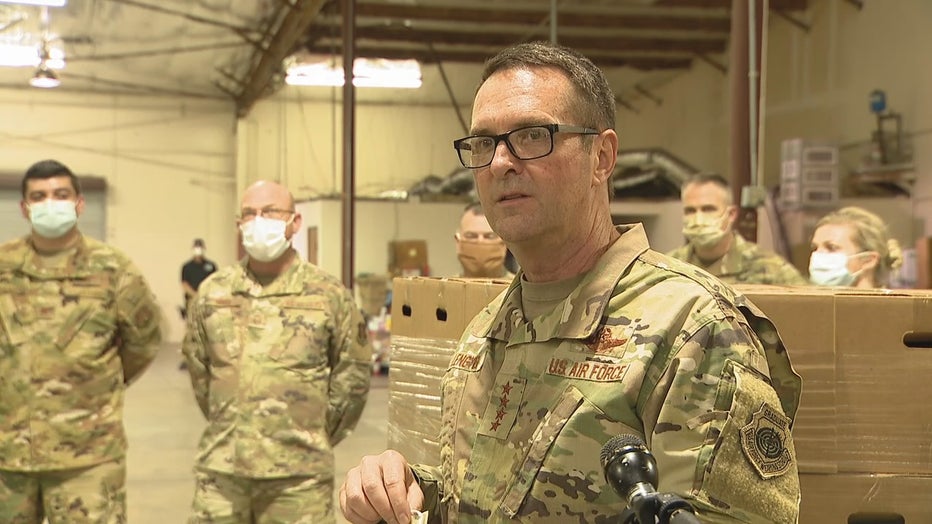 Lengyel says the response to COVID-19 is the first time since Hurricane Katrina that more than 80,000 National Guard troops have been deployed to the same mission.

“Because of the men and women here, our nation is better able to deal with it. We can see the other side,” he said.

Food Bank CEO Julie Butner says some members of the National Guard have put their day jobs on pause to be in Fort Worth.

While others who’ve been furloughed are grateful for the chance to work.

“By being activated to support us, they have jobs and they have income, which they wouldn’t have otherwise,” Butner said.

And before heading back to Washington D.C., Lengyel presented his personal challenge coin to a few of the guardsmen.

The Food Bank CEO says they’re not accepting food donations right now, but they are accepting money. Butner says as the economy improves, their demand will go down. But the food bank is preparing for at least 18 more months of operating under high demand.