Fort Worth student shot, stabbed during fight near campus

A Fort Worth Polytechnic Senior High School student was stabbed and shot during a fight near campus at lunch-time Thursday.

FORT WORTH, Texas - A Fort Worth Polytechnic Senior High School student was stabbed and shot during a fight near campus at lunch-time Thursday.

MedStar confirmed that the 17-year-old victim was transported to a hospital after being stabbed a few times and shot in the leg.

Police said it happened at about 12:30 p.m. at a Texaco gas station at E Rosedale Street and Conner Avenue just across the street from Polytechnic Senior High School. The school was placed on lockdown for some time.

Police are looking for one teen they say had a knife and stabbed the student and a second teen who had a gun and shot him. They are both believed to be minors.

There were no other injuries reported. Police say they’ve identified the two suspects they are looking for, and Fort Worth PD's Gang Unit is investigating.

The school district confirmed that the victim is an 11th grade student at Polytechnic Senior High School. Police have not released the suspects’ names, but they are searching for them.

Surveillance video shows dozens of students were nearby watching a fight. During the fight, the suspect started stabbing the 17-year-old student. The suspect then called his friend to come help, and he came with a gun. Police said he fired three times, hitting the victim once in the leg.

Fort Worth student shot, stabbed at gas station across the street from school

A teenager is in the hospital after being stabbed and shot near Polytechnic High School in Fort Worth.

“I heard shots too from the inside, about two of them,” the son of the owners of the Texaco station said.

“It is right across from school. But at no time were others in danger because it appeared to be gang-related between two individuals,” said Fort Worth Police Officer Ivan Gomez.

Sophomore Ma’Kayla Davis says she was on the corner outside of the school during lunch period when she heard the gunshots at the Texaco across the street.

“It’s ridiculous!” she said about seeing classmates run towards the gunshot instead of away.

Students ran away initially, but then began running toward the teen who was stabbed. Police say he will be okay.

“I know him. One of my friends was his tutor at Boys & Girls Club he attends. I know who the victim is, came by yesterday,” the son of the owners of the Texaco station added. “I told myself, ‘Wow, it's him.’ He's not involved in any mischief or mishaps, seems to be a good kid.  Upward Bound Program. Sad he had to be the victim.”

Employees at the Texaco have reportedly noticed that fights in the area have been increasing. Because when one happens, they see an immediate drop in business because of all the students running to watch the fight. 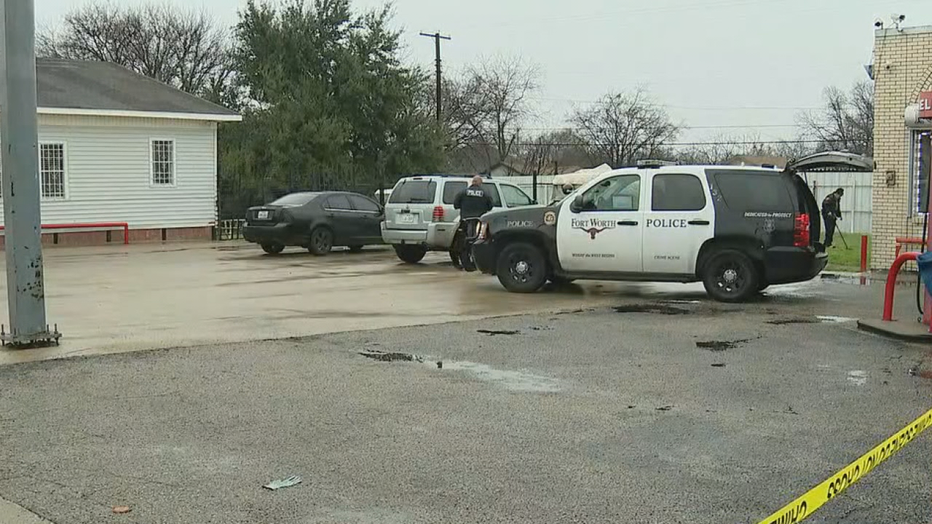 Fort Worth ISD notified parents Thursday afternoon by email, voicemail and social media. They asked them to wait for students to be released after police cleared the scene.

“All we heard was somebody had gotten injured across the street at the store and that the school itself was on lockdown,” said parent Michael Rodriguez.

“My daughter as soon as she heard the gunshots, she texted me ‘Mama there’s gunshots!’” recalled parent Sarah Walters. “I was in panic because my kids are here and at the time I couldn’t contact my son.”

Fort Worth ISD released a statement saying, “It is extremely unfortunate that a Poly High School student was injured in an off-campus altercation today during a scheduled lunch time. The Fort Worth ISD takes the safety of all students, employees and visitors on all our campuses, and in even in the neighborhoods where our schools are located, very seriously and such behavior is completely unacceptable.”