All Saints Episcopal school hosted a team from just outside New York City.

FORT WORTH, Texas - High schools across North Texas on Friday have observed moments of silence and held ceremonies in honor of 9/11 victims. None of the students were born then.

Parents and coaches say the events help them understand.

All Saints Episcopal School hosted a team from just outside New York City. They honored first responders and the troops who died in Afghanistan last month.

The visiting team's coach had his own special honor for an alum who died on 9/11. 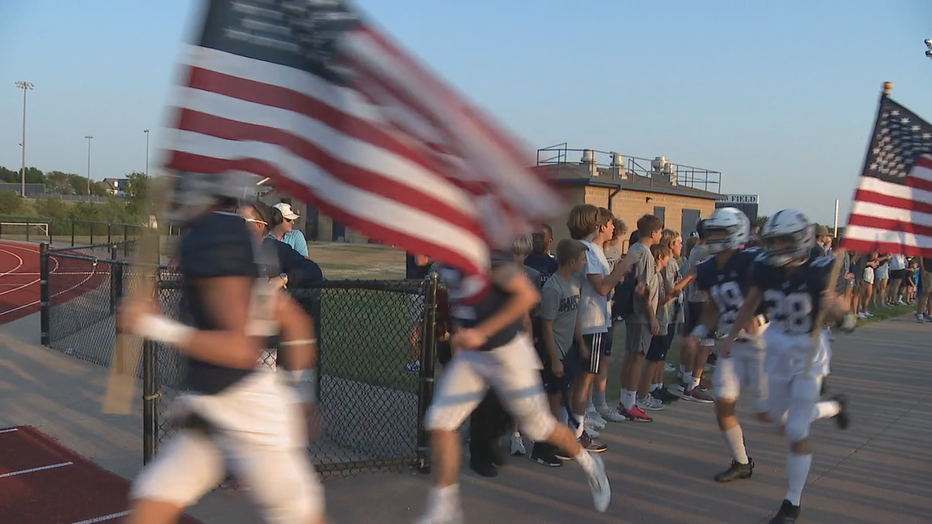 The Friday night lights felt different this Friday in Fort Worth.

All Saints Episcopal High School has a special team on the visiting side: the Archbishop Stepinac Crusaders from White Plains, New York, 20 minutes north of Manhattan.

The matchup happened on the eve of the 20th anniversary of Sept. 11. It’s a day that still hits home for the Crusaders.

On the back of Coach Michael O’Donnell’s Jacket is the number 70.

34-year-old Joe Riverso was at work inside the north tower of World Trade Center when the first plane hit. He was among the first victims killed in the attack.

Riverso previously played and coached at Archbishop Stepinac. Coach O’Donnell saw him the night before the attacks.

"You wanted to sit back and feel sorry for yourself, but you couldn’t," the coach said. "Because you are a coach, and people are looking at us for strength."

The players on the field weren’t even alive when it happened. But Coach Aaron Beck of All Saints wants his boys to fully understand it.

"Making sure they understand and they pay tribute and they are reminded about folks before them and still do," he said.

Prior to kick-off, the Saints ran out of the field holding 13 American Flags for the 13 U.S. service members killed outside the Kabul Airport in August followed by a moment of silence for all first responders.

It was a moment Archbishop Stepinac families flew across the country for. And on the home side, their opponents were honored to host.