Fort Worth City Council and the police chief discussed how the department has been handling protests in the city over the past few weeks.

FORT WORTH, Texas - Fort Worth City Council and the police chief discussed how the department has been handling protests in the city over the past few weeks.

For more than two weeks now, Fort Worth protesters have marched and chanted. Sometimes, peacefully. Sometimes, not.

“I think the word peaceful is subjective,” said Fort Worth Police Chief Ed Kraus. “I think it depends on your perspective.”

“On that particular night, a group of between 50 and 75 individuals went inside Texas De Brazil and started confronting diners while they were eating,” he explained. “The management asked us to remove them. We did with the help of one of the organizers.” 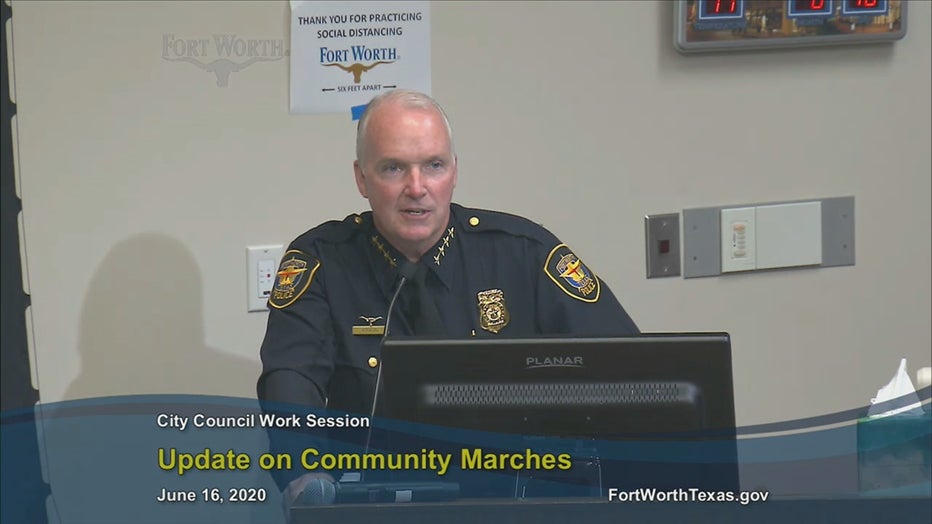 Council members and Mayor Betsy Price expressed gratitude toward the department, but it was a poignant moment from Council Woman Gyna Bivens that seemed to punctuate the discussion. She applauded police but also reflected personally on why the protests are happening to begin with.

“Just know that I appreciate everything the chief is doing. I think we have a good chief, but I don’t want us to not listen to the message if it doesn’t come the right way, the sweet way,” Bivens said. “Just remember these two black council members who you all say you love and I know you do. We wouldn't be here today but for people who were able to withstand dogs, the water hoses and the hate.”

The police department made three additional arrests on Saturday. Two protesters violated city ordinances and another was found to have an outstanding arrest warrant.