After the city says it received a complaint on social media about the mural, the art commission held a meeting to discuss its future.

FORT WORTH, Texas - The Fort Worth Art Commission plans to hold a public hearing to discuss to future of an 80-year-old mural at the Will Rogers Memorial Center.

The mural shows slaves picking cotton. It's part of a larger mural that shows moments in Texas History.

But after the city says it received a complaint on social media about the mural, the art commission held a meeting to discuss its future. 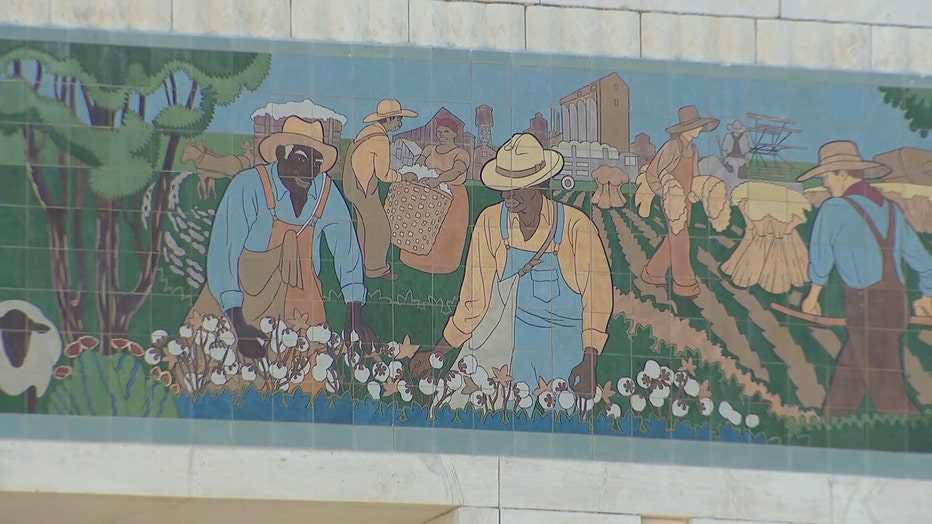 “When I look at the mural, it gave me an opportunity to say: ‘This is where we were, but this is not where we will be,’” Williams said.

Director of Public Art Martha Peters says the city asked the art commission to review the 1936 mural after a complaint was made on social media about this depiction last month.

“During the civil war, the Texas economy was primarily agrarian, and cotton was the main crop supported substantially by slave labor,” he said.

Miller called the Will Rogers Memorial Center the largest and best-designed representation of the Art Deco style in Texas. He noted the complex was a key component of the Texas centennial celebration.

“In historic preservation, we would call the murals a character-defining feature or distinctive materials,” Miller said.

Williams says she wants the people of Fort Worth to hear the context behind the mural either in person or in written form on a plaque or pamphlet.

Commissioner Sheila Hill agreed with Williams. She says the historic tiles should be discussed in a town hall setting so the commission can hear varying opinions.

“We’re torn again with what is offensive to some people and what isn’t to other people,” the commissioner said.

In order to remove a piece of artwork, the commission has a policy to follow. It states in part that before removing artwork, the city should have 10 years of documented complaints. According to the art director, last month’s complaint is the first brought to the commission.

“We can’t expect them to say well we’re gonna chisel it down,” Williams said. “But if it’s gonna be left up, there needs to be some information and education provided so that folks will be able to know.”

The commission decided to plan a public town hall in November to discuss the mural’s future. Once the meetings are complete, the commissioners will take their recommendations to the city council.