A Fort Worth police officer was fired from his job because of a racially insensitive meme posted on his personal Facebook page.

FORT WORTH, Texas - A Fort Worth police officer was fired from his job because of a racially insensitive meme posted on his personal Facebook page.

“After reviewing the Internal Affairs findings, Chief Ed Kraus concurred with the chain of command determination that Officer Ballard was in violation of departmental general orders and that his conduct brought justified unfavorable criticism upon the department,” the department said in a release.

FWPD said it received numerous complaints about the post that has since been deleted. It contained a photo of a black man in a casket with the caption, “The face you make when you don’t understand ‘stop resisting.’” 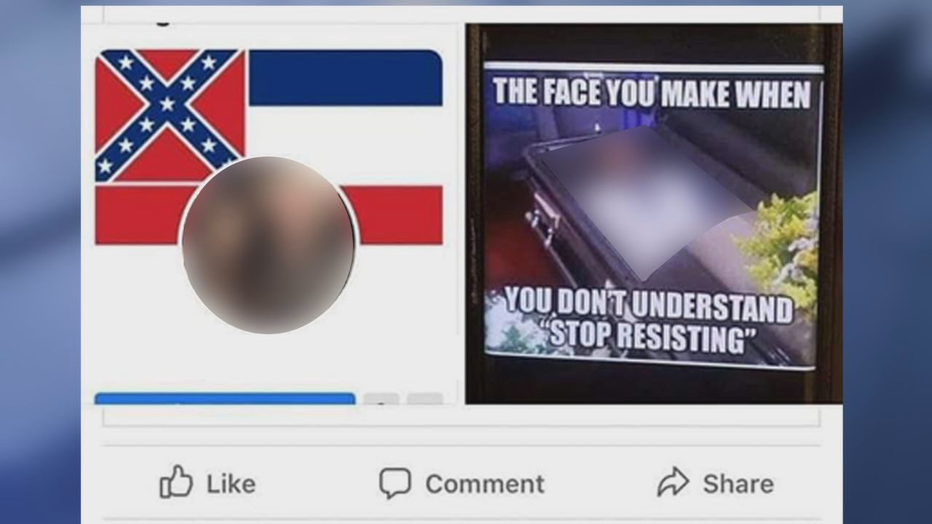 “The Fort Worth Police Department holds every officer to a very high standard and any comment, post, or any communication which is racially insensitive and unprofessional will not be condoned in any manner. Our department will continue to hold accountable those who do not meet that standard,” the department said.

Several groups, including United My Justice, protested outside city hall and the police headquarters last week, demanding that Ballard be fired.

“You were thinking it’s funny and it’s not funny. I’m standing here today to say we will not tolerate it,” said Niki Pugh, president of United My Justice.

UMJ, the same group which organized Fort Worth protests in wake of the George Floyd killing held a small protest march at city hall. It was less than 24 hours after the post began to generate outrage.

“We sit at the table with them and they say you have a bad apple. We will handle all the bad apples. Well it seems like the bad apples just keep on falling,” the group’s vice president, Cecil Collier, said.

Mayor Betsy Price said she supports Chief Kraus' decision and believes Ballard needs to be held accountable for his actions.

"This is a pitiful example of what it looks like when an officer fails to uphold the standards of decency, respect and sensitivity that FWPD officers are hired to exemplify," she said in a statement. "Resisting arrest is not a license to kill. End of story. I am quite frankly appalled by the post and the image."

The mayor said FWPD must continue to work hard to build trust in the community and actions like these that unravel the hard work are "extremely disheartening."

The internal affairs investigation into this matter is continuing. The department is looking into the role of a second police officer who shared that joint Facebook account with Ballard.