for 4-year-old he's formed a special bond with

FORT WORTH, Texas - A Fort Worth deputy has been helping a single mother by babysitting her 4-year-old daughter.

The two are popular on social media with the funny videos they make.

On Sunday, that deputy wanted to throw a surprise birthday party for her.

Deputy Bryan Woodard and Alexis have a special bond.

With the help from people all across the country, he was able to make her birthday one she'll never forget.

“This is going to be a story where you don’t just see a regular uniform,” Woodard said.

Deputy Woodard works for the Fort Worth Marshal Division, but on his off days, he has his hands full with 4-year-old named Alexis, or as he calls her, “chicken nugget.”

“She is a bundle of joy and a handful. Keeps you entertained,” he said.

Woodard met “chicken nugget,” along with her mom and older sister, at a car wash a few years ago.

Since then, the two have been hanging out and making funny videos.

“Every time she sees a police officer, she wants to go up and hug them and talk to them. She just loves Bryan,” Alexis’ mother, Johnniesha Randle, explained. 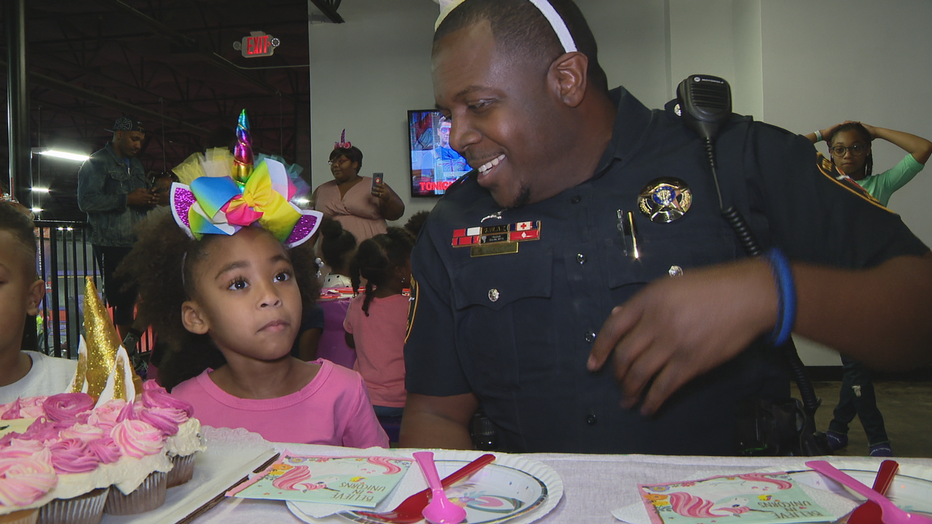 As a single mother, Randle says Woodard has shown her family the literal meaning of service to the community.

“It’s the father she’s never had and she deserves a good father role model in her life, and he is that,” she said.

On Alexis' 4th birthday, Woodard wanted to throw her a surprise party filled with the things she loves: Unicorns and tutus.

Once he told his followers on Facebook about the party, people from all over the country - even other countries - sent "chicken nugget" gifts.

“That just tells you there is a lot of good in this world, and just because someone is absent, doesn’t mean the world is going to turn its back on you,” Woodard said.

When it came time for the big surprise, Alexis was speechless.

But she hugged everyone that gave her a gift, then spent a lot of time jumping on the trampolines at a local trampoline park.

“It’s a blessing from God that she has support behind her,” Randle said. “I’m trying as a single mother to do my part and do the best I can do and that’s all I can do. I get up and go to work. Mr. Bryan helps me out when I don’t have a babysitter.”

A little girl who loves law enforcement is doing more than preparing this single guy for when he has a child of his own one day.

“She’s actually helping me. Because after a long day of dealing with people, some people have attitudes towards law enforcement, because we have a rap that is out there now, but she kind of soothes that pain. It’s like medication. She helps me out,” Woodard said.