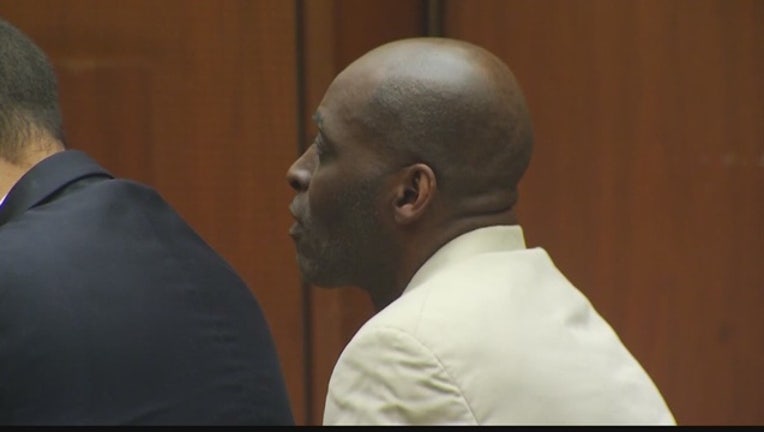 LOS ANGELES (CNS/FOX 11) - Michael Jace, an actor who portrayed a Los Angeles police officer on the television series "The Shield," was sentenced today to 40 years to life in prison for shooting his wife in front of their two young children in their Hyde Park home.

From Phil Shuman:
It's always one of the most poignant moments in court.. the so called ''victim's impact statement."  Before sentencing today, April, Jace's mother and younger cousin tearfully talked of the shooting death, the murder of April by her husband Michael two years ago.

The case got a lot of coverage as he was an actor of some accomplishment and there were two little boys home at the time of the cold blooded killing. Jace was convicted of ''second degree'' murder, meaning it was more a heat of the moment crime than a premeditated one, but the pain is still there.

''She was a happy person who just wanted to live life," with an ''infectious personality'' is what April's cousin said.   She said they were more like sisters than cousins, saying she's raising the two boys with her own children as if they were her own.

April's mother said she wondered about her grandchildren  ''when in their teenage years it will come out in conversation that their father killed their mother.'' Can you imagine?

In 2014 there were 260 murders in Los Angeles, each one no doubt a tragedy. It's dangerous business to try to rank them or describe them in some order of magnitude, which one was ''worse'' or '' sadder'' or '' more tragic'' than the next, but these circumstances, a loving mother, a father who apparently snapped, 2 young boys who were home at the time their father killed her, one of whom had to testify at trial that Dad yelled at Mom ( an avid runner and athlete ) "If you want to run, run to heaven'', this one was one of the worst in a long terrible list.

Jace got 40 to life.  He apologized, a little too late of course, in open court, insisted that it's ''important that it was second degree murder, nothing was premeditated, though I know that won't bring her back.''  So true.

Jace was convicted of second-degree murder on May 31 by a jury panel that deliberated for less than three hours over the course of two days before reaching its verdict. The jury also found true an allegation that Jace personally used a handgun.

Before the sentence was handed down, Jace told the court that there was "no justifications for my actions" when he shot his wife, April. He also turned to the family and said he was sorry.

In addition to a sentencing memo laying out the 15 years-to-life sentence that applies to the murder charge and 25 years-to-life for the gun enhancement, the prosecution filed a Statement of View to be considered in any future parole hearing.

"Defendant Jace is a volatile individual who displays unpredictable and irrational rage and he is prone to violence," the statement concludes. "Any discussion about parole for Defendant Jace must be considered with extreme caution."

The statement also recounts the trial testimony of Jace's ex-wife, Jennifer Bitterman, whom he divorced in 2003, alleging that Jace choked and hit her and threw her against a wall in front of another woman while Bitterman's 6- month-old son cried in his crib nearby.

Bitterman also alleged that Jace had threatened to kill her, according to Mokayef.

"Outside of this tragic killing, Mr. Jace has been a law-abiding citizen who has never been convicted or even arrested for a crime. This was truly an anomaly for Mr. Jace."

The defense memo requests the minimum sentence prescribed by law, though it is not clear that Los Angeles Superior Court Judge Robert J. Perry has much leeway in setting the prison term.

In her closing argument, Mokayef told jurors that Jace was "obsessed" with his wife, April, who was trying to leave him amid his allegations that she had been unfaithful to him.

Hicks conceded that Jace shot his wife once in the back and then twice in the legs on May 19, 2014, at the home the couple shared with their sons in the Hyde Park area of Los Angeles, but questioned whether the actor would have premeditated the shooting knowing that the children would be there. Hicks said Jace simply snapped and was guilty only of voluntary manslaughter.

Mokayef said at the time of the conviction she was "absolutely satisfied" with the second-degree murder conviction.

"Because it was a murder, and it wasn't a voluntary (manslaughter), and that's what the point was -- it was a difference between what the jury thought as far as the planning involved in it, but it was definitely a murder and the right outcome happened," she said.

"We understand that it's not premeditated, and that's what our whole goal was, to get that out, that it wasn't premeditated," he said. "We always knew he was going to be found guilty of something."

Savoy Brown, April Jace's son from a previous marriage, said a conviction for first- or second-degree murder was enough to make him happy.

"Each time I have to see his face, even if it's from behind, it's really depressing," Brown said. "It hits you hard without you really realizing it."

In her closing argument, Mokayef told the six-man, six-woman jury that the testimony from the couple's 10-year-old son "tells you it was premeditated." The boy, Nehemiah, testified Wednesday that he saw his father bring his 40-year-old mother into a hallway, where she fell down.

"Then my dad said, `If you like running, run to heaven,' and then he shot her," the boy told the jury.

The 53-year-old defendant "is saying the words that show premeditation - - go to heaven," Mokayef said, noting that Jace shot his wife at close range after having already shot her in the back.

"Who is going to argue this is not an intent to kill?" she asked.

In an interview with police after his wife's death, Jace told police that he "wanted her to feel some pain" because she was a runner, the prosecutor noted.

In an audio-recorded interview played for the jury, Jace told police that he was holding the gun when his wife returned home from a baseball game with their sons but that she didn't immediately notice the firearm.

He told police that she lunged at him, he pushed her away and she spun around before the shooting, and that all he intended to do was "just shoot her in the leg," not kill her.

The actor also told detectives that he had been drinking that day and that "there were moments" when he had contemplated taking his own life.

The prosecutor noted that the couple exchanged 164 text messages the day of the shooting, telling jurors that Jace's wife wrote one text message that she was "afraid to come home" and that her husband had engaged in "trickery to make her believe he wasn't home."

But the defense attorney said there was no evidence that Jace was brewing and plotting the demise of his wife of nine years, and that the prosecution had "oversold this case" by pursuing a first-degree murder conviction.

Jace is best known for his role as Los Angeles police Officer Julien Lowe in "The Shield." He has also appeared in such films as "Forrest Gump," "Boogie Nights" and "Planet of the Apes."