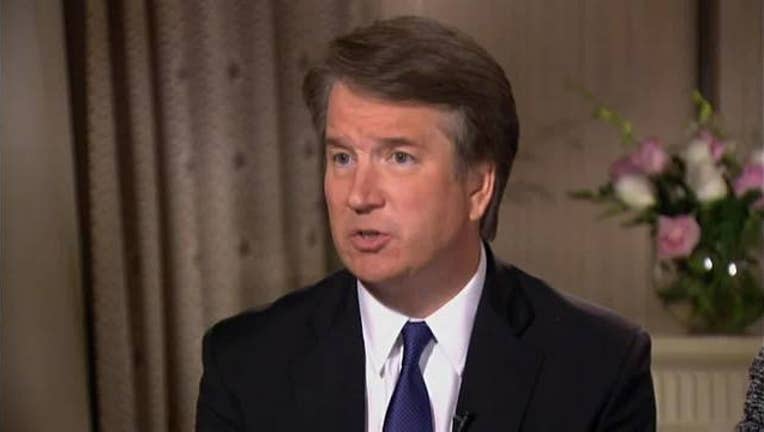 SAN MATEO, Calif. - Brett Kavanaugh's ex-freshman roommate at Yale issued a written statement on Tuesday, after a woman in a New Yorker article accused the Supreme Court nominee of pulling down his pants 35 years ago and thrusting himself in her face.

James Roche, who is CEO of Helix in San Mateo, issued the statement through his media spokesman, Peter Kauffmann. KTVU obtained a copy of that statement.

Roche, who declined media interviews, said he he did not witness the 1983 act in question: When Debbie Ramiez said Kavanaugh was standing next to her, laughing, pulling up his pants, after putting his penis in her face, the New Yorker reported on Sunday.

She also told the magazine she was inebriated as well and has admitted to holes in her memory of some details.

But Roche did say that Kavanaugh was a "heavy drinker" at the time, and he became "aggressive and belligerent."

Kavanaugh has denied both Ramirez's allegation and an earlier one, by Palo Alto psychology professor Christine Blassey Ford. Ford claims Kavanaugh tried removing her clothes and covered her mouth to prevent screams after he pinned her on a bed during a high school party.

President Donald Trump accused Democrats on Tuesday of using a "con game" to try scuttling Kavanaugh's  nomination and disparaged Ramirez, saying she herself conceded she was "totally inebriated and all messed up."

On Thursday, the Senate Judiciary Committee plans a pivotal, election-season hearing at which both Kavanaugh and Ford are due to testify separately.

Here is his Roches's full statement: I was Brett Kavanaugh’s roommate at Yale University in the Fall of 1983. We shared a two-bedroom unit in the basement of Lawrence Hall on the Old Campus. Despite our living conditions, Brett and I did not socialize beyond the first few days of freshman year. We talked at night as freshman roommates do and I would see him as he returned from nights out with his friends. It is from this experience that I concluded that although Brett was normally reserved, he was a notably heavy drinker, even by the standards of the time, and that he became aggressive and belligerent when he was very drunk. I did not observe the specific incident in question, but I do remember Brett frequently drinking excessively and becoming incoherently drunk.

I became close friends with Debbie Ramirez shortly after we both arrived at Yale. She stood out as being exceptionally honest, with a trusting manner. As we got to know one another, I discovered that Debbie was very worried about fitting in. She felt that everyone at Yale was very rich, very smart and very sophisticated and that as a Puerto Rican woman from a less privileged background she was an outsider. Her response was to try hard to make friends and get along.

Based on my time with Debbie, I believe her to be unusually honest and straightforward and I cannot imagine her making this up.

Based on my time with Brett, I believe that he and his social circle were capable of the actions that Debbie described.

I do not consider myself to be a political person and I have no political agenda. I have shared this information with a small number of reporters who reached out to me directly because Debbie has a right to be heard and I believe her.

I have been asked for more detail and additional stories, but this is all that I am comfortable sharing. If I could contribute more first-hand information, I would, but I will not be granting any more interviews or answering any more questions at this time.