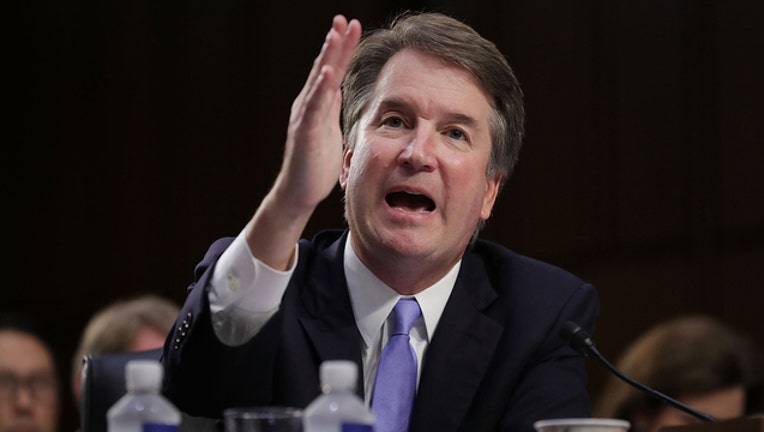 WASHINGTON - (AP) -- Christine Blasey Ford's lawyers said Wednesday they have given the Senate sworn affidavits from four people who say she told them well before Brett Kavanaugh's Supreme Court nomination that she had been sexually assaulted when she was much younger.

And according to all four, she either named Kavanaugh as the assailant or described the attacker as a "federal judge."

At the U.N., meanwhile, President Donald Trump said on the eve of the Senate Judiciary Committee hearing with Kavanaugh and Ford that Republicans "could not be nicer, could not be more respectful" in their treatment of Ford. He described his nominee as "an absolute gem" and said he probably would have pushed for faster confirmation rather than waiting for Ford's testimony.

In one of the affidavits, family friend Keith Koegler said he wrote to Ford in a June 29 email, "I remember you telling me about him, but I don't remember his name. Do you mind telling me so I can read about him?"

Trump nominated Kavanaugh, 53, to the high court on July 9. Kavanaugh staunchly denies ever sexually assaulting anyone, and his allies have questioned the credibility of Ford and a second accuser based in part on what they say is a lack of corroboration. Trump has dismissed both accusations as a "Democratic con job."

The affidavits signed Monday and Tuesday of this week could give more weight to Ford's story on the eve of her testimony -- and Kavanaugh's expected denial -- before the Senate Judiciary Committee on Thursday. Republicans are concerned that, win or lose, the battle over Kavanaugh's nomination is further animating women already inclined to vote against Trump's party in November's elections in which control of the next Congress is at stake.

Hanging in the balance is Trump's chance to swing the high court more firmly to the right for a generation. Despite Majority Leader Mitch McConnell's forecast that Republicans will win, Kavanaugh's fate remains uncertain in a chamber where Republicans have a scant 51-49 majority.

Ford, 51, went public with her story in The Washington Post recently, saying Kavanaugh had pinned her down, tried to remove her clothes and clamped a hand over her mouth at a party when both were in high school. She got away when a second male in the room jumped on the bed and sent all three tumbling, she says.

According to the affidavits, Ford revealed the assault in varying levels of detail between 2002 and Koegler's email in June.

Her husband, Russell Ford, stated that he became aware around the time the couple wed in 2002 that his wife had "any experience with sexual assault," but she provided no details at the time. In 2012 during a couples therapy session, he says, she revealed that in high school she had been "trapped in a room and physically restrained by one boy who was molesting her while another boy watched." He says she named the attacker as Kavanaugh.

The subject came up again when Trump was considering his first Supreme Court nominee, who ended up being Justice Neil Gorsuch. Before the selection, Ford had told her husband that she was afraid the president might nominate Kavanaugh. The matter came up again when Justice Anthony Kennedy announced his retirement and Trump had a second seat to fill.

In a third affidavit, Adela Gildo-Mazzon, a friend of more than a decade, said Ford first told her about the assault in June, 2013. The two met at a Mountain View, California, restaurant, where Ford arrived "visibly upset."

"Christine told me she ... had been thinking about an assault she experienced when she was much younger," Gildo-Mazzon's statement says, adding that she has a receipt from the meal. "She said that she had been almost raped by someone who was now a federal judge."

Neighbor Rebecca White said she was walking her dog in 2017 when she ran into Ford, who said she had seen White's social media post describing her own experience with sexual assault.

"She then told me that when she was a young teen, she had been sexually assaulted by an older teen," White recalled in the document. "I remember her saying that her assailant was now a federal judge."

The documents are likely to be central in the momentous hearing on Thursday in Washington. Committee Chairman Chuck Grassley said Arizona prosecutor Rachel Mitchell will be brought in to handle questioning of Kavanaugh and Ford. Mitchell comes from the Maricopa County Attorney's Office in Phoenix, where she is the chief of the Special Victims Division, which covers sex crimes and family violence.

Hoping the hearing will yield no new surprises, the Judiciary Committee scheduled its own vote on Kavanaugh for Friday, and Republican leaders laid plans that could keep the full Senate in session over the weekend and produce a final showdown roll call soon after -- close to the Oct. 1 start of the high court's new term.

Meanwhile, the Republicans were still assessing what Kavanaugh's Monday interview on the Fox News Channel -- an unusual appearance for a Supreme Court nominee -- indicates about how he would do in Thursday's hearing.

During the interview, Kavanaugh denied sexually assaulting anyone. He also denied the account of a second woman, Deborah Ramirez, who told The New Yorker magazine that Kavanaugh caused her to touch his penis at a party when both were Yale freshmen.

Some in the White House expressed relief that Kavanaugh, 53, presented a positive image to counter the allegations. Yet he appeared shaky at times. And there remained concern among aides and Trump himself about how Kavanaugh would hold up facing far fiercer questioning from Senate Democrats, according to a White House official not authorized to speak publicly.

The affidavits are not the first challenges to Kavanaugh's denials.

James Roche, a Yale graduate who says he was Kavanaugh's roommate in 1983, issued a public statement saying he was "close friends" with Ramirez and "cannot imagine her making up" the story about Kavanaugh exposing himself.

Predictably, that played badly with Democrats.

Treatment of Ford, 51, on Thursday will be watched closely.

"It's very important to take allegations of those who come forward seriously, and I think we need to go into this hearing with the view that we will listen," she said.