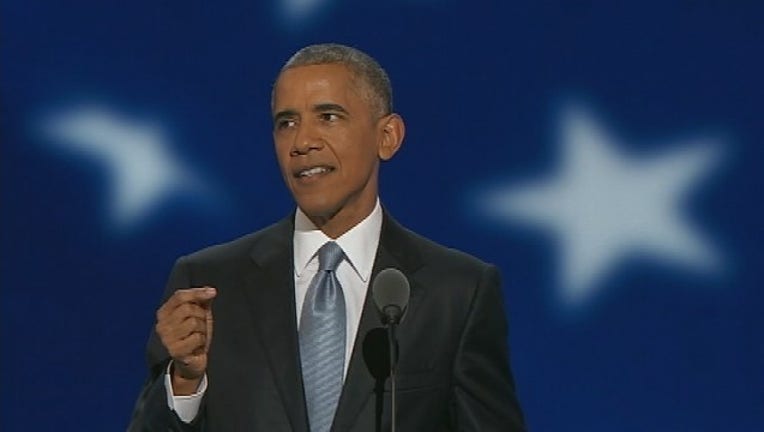 WASHINGTON (AP) — For Democrats lulled into apathy by the uninspiring presidential election, President Barack Obama is offering himself as motivation.

He's not just validating Democratic nominee Hillary Clinton or holding up his record as a reason for voters to keep the White House in his party's hands. Obama wants his supporters to see anything less than a vote for Clinton as a sign of disrespect to the nation's first black president.

"I will consider it a personal insult, an insult to my legacy, if this community lets down its guard and fails to activate itself in this election," Obama said Saturday during an impassioned address to the Congressional Black Caucus Foundation's annual dinner. "You want to give me a good send-off? Go vote."

The president was speaking specifically to an audience of African-American leaders, but his broader message is aimed at all corners of the young, diverse coalition that twice propelled him to the White House. While Clinton leads Republican Donald Trump by wide margins with young voters, blacks and Hispanics, party leaders are deeply concerned that turnout among those groups will fall short of what she needs to win.

"The president knows firsthand how important it is to not take a single vote for granted," said Jennifer Psaki, Obama's communications director. She said Obama would spend the coming weeks taking his message to "African-Americans, young people, old people and anyone who needs an extra boost to remember what is at stake."

Obama aides say the president has grown increasingly frustrated this year by the indifference to Clinton among some Democrats, especially given what he sees as an unacceptable alternative in Trump. That frustration has been particularly acute with black voters who tell Obama they're saddened by the end of his presidency but aren't enthusiastically rallying behind the candidate who would safeguard most of his work.

"He knows when he ran, it was a great source of inspiration," civil rights activist Rev. Jesse Jackson said. "People cannot just limit the inspiration to his presidency."

When Obama met with advisers in August to start planning his remarks for the Congressional Black Caucus event, he made clear he wanted to light a fire under that group of voters.

In the years following Obama's historic 2008 victory, Democrats have puzzled over how to turn out the president's coalition of supporters when he's not on the ballot. The party saw the consequences of failing to do so in 2010 and 2014, when Democrats suffered sweeping defeats in the midterm elections.

Clinton's campaign has banked in part on disdain for Trump being a strong motivator for Obama supporters, particularly given the Republican's role in questioning whether the president was born in the United States. Trump acknowledged for the first time last week that Obama was born in the U.S., but did not apologize for falsely suggesting otherwise.

While Trump may infuriate Obama supporters, Democrats say Clinton's struggle to give voters reasons to turn out for her is dampening party enthusiasm.

"It's really hard to motivate Democrats with a negative," said Celinda Lake, a Democratic pollster. She said young voters in particular are less likely to be motivated by the prospect of voting against a candidate they dislike than for one they support.

A recent Washington Post/ABC News poll showed that among likely voters age 18 to 39, Clinton has a 23-point lead over Trump - the same edge Obama had with younger voters over Republican Mitt Romney at this stage of the race four years ago. But Obama's lead amounted to 59 percent of young voters, while Clinton's is just 47 percent, suggesting she may not be to run up the score with these crucial voters.

Clinton advisers contend they still have time to bolster Democrats' views of the former secretary of state. The campaign is paying particular attention to younger voters this week, with Clinton set to spotlight her plans for lowering education costs during a speech Monday at Temple University in Philadelphia.

The Clinton campaign has also deployed Michelle Obama, the popular first lady, to vouch for the Democratic nominee with young voters. During a campaign stop last week at George Mason University in Fairfax, Virginia, Mrs. Obama shared her own frustration about voters who can't seem to muster the same enthusiasm for Clinton as they did for her husband.

"When I hear folks saying that they don't feel inspired in this election, well let me tell you, I disagree. I am inspired," Mrs. Obama said.

Both of the Obamas are expected to be active campaigners in October, with a particular focus on Florida, North Carolina, Ohio and Pennsylvania. The Clinton campaign is eager to dispatch them around crucial registration deadlines and during early voting windows.

But White House cautioned that the president, with a busy day job of his own, would not be a daily fixture on the campaign trail in October. The work of wooing his supporters this year still falls to the candidate whose name is on the ballot.