More than half a dozen homes that were under construction in a McKinney neighborhood were leveled by a large fire Saturday evening.

McKINNEY, Texas - Fire destroyed several homes that were under construction and threatened at least one that was occupied in a McKinney neighborhood Saturday evening.

Firefighters are still putting out hot spots in the Wilmeth Ridge development on Marigold Drive, northwest of Lake Forest Drive and Highway 380.

Video shared with FOX 4 showed thick black smoke rising from the seven homes that were under construction. Witnesses said the flames spread quickly from one house to another and all were badly damaged or destroyed.

The fire did start to spread to a nearby occupied house. Flames reached the attic, but firefighters were able to quickly put them out to spare the home. The fire also damaged the fences of some neighbors. 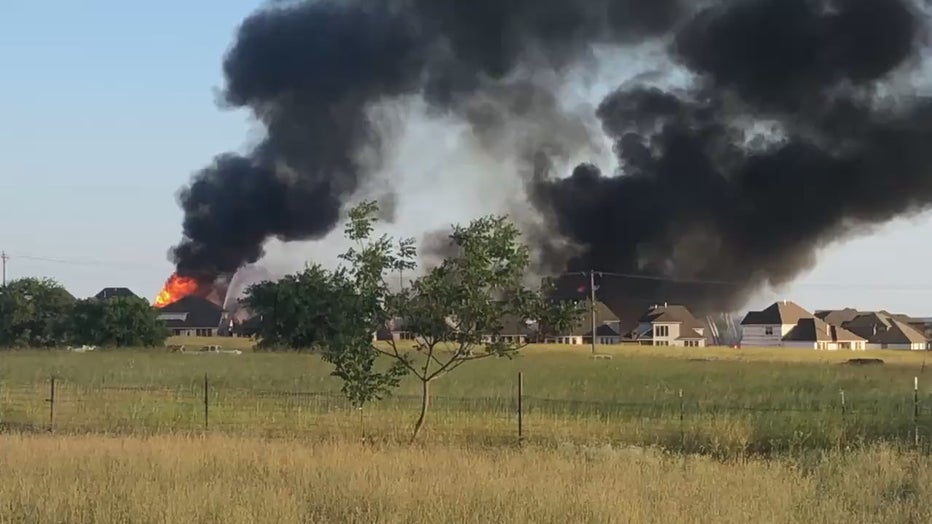 Mary House was set to move into one of the homes that was destroyed within the next month or so. She got a call from a friend to rush to the site.

"I live a few blocks over. I’ve been renting for about a year and we were at a baseball game just a few miles away from here and we saw the big black billowing smoke and we were concerned," she said. "Unfortunately, it was this block which was to be our new home. So, it’s unfortunate and it’s pretty devastating."

It’s not yet clear how the fire started. The McKinney Fire Department said investigators will be working to determine the cause.

The department also said there were no construction workers at the site when the fire started, and no one was hurt.