A fire and explosions at the Haltom City’s Waste Connections facility damaged millions of dollars in equipment.

HALTOM CITY, Texas - A fire and explosions at the Haltom City’s Waste Connections facility damaged millions of dollars in equipment.

The damage could affect some other areas of the city with delays in trash pickup.

Neighbors reported hearing explosions at the facility on Old Denton Road and seeing flames shoot 20 to 30 feet into the air around 9 p.m. Tuesday.

The fire marshal says the fire started inside the cab of one of the trash trucks and appears to be due to some sort of electrical short. Eleven trucks were destroyed, causing some minor delays in trash pickup.

Several residents who live near the Waste Connections facility were shaken awake by a series of explosions.

“I heard some boom, but I didn’t pay much attention,” said resident Jim Moore. “And then I noticed my phone going off with some of these notices.”

Moore scrolled through a list of comments all posted online in a matter of minutes.

Part of the immediate aftermath was captured on another resident’s cell phone. Flames and smoke were seen shooting into the air.

According to Haltom City Fire Rescue, the fire spread quickly and started in one compressed natural gas truck and spread to others that were all plugged into the main CNG line. Workers were able to shut it off. 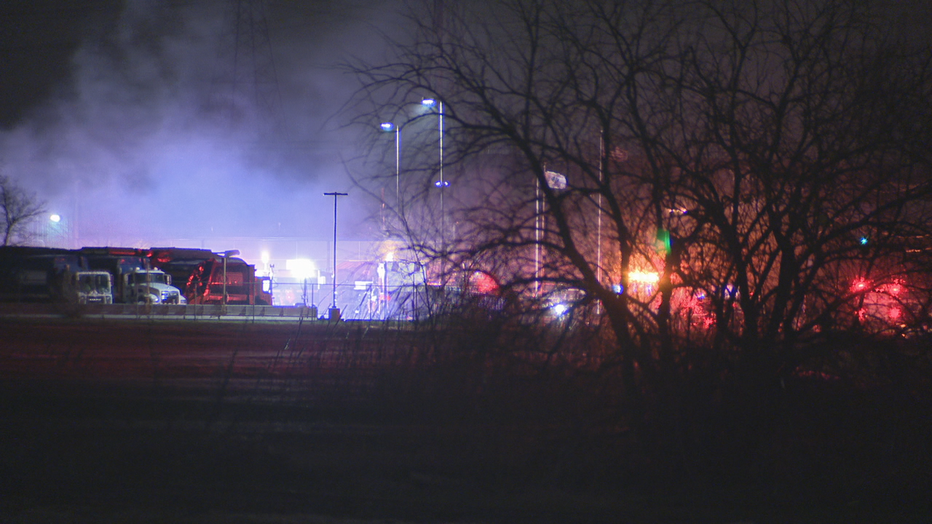 “We had a lot of fire at one time with the north winds blowing it right down the line,” said Haltom City Deputy Fire Chief Fred Napp.

It took about 60 firefighters from Haltom City and surrounding communities about an hour and a half to get the fire out. No one was injured.

On Wednesday morning, trash trucks from Dallas and McKinney were brought in to pick up the slack.

11,000 resident rely on Waste Connections to pick up their trash. The city said to expect some delays in service.

“Think you for your patience during this time,” Haltom City officials said in a statement. “If it is not picked up it is due to the existing circumstances.”

Deputy Chief Napp says there doesn’t appear to be any environmental hazard caused by the fire. The biggest challenge he said was offloading all of the charred trash stuck inside those 11 trucks.