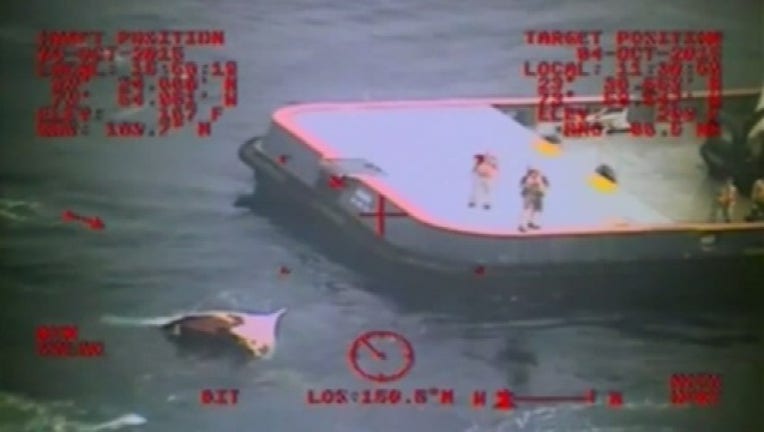 JACKSONVILLE, Fla. (AP) — Investigators trying to determine why a 790-foot cargo ship stalled and sank in the howling winds of Hurricane Joaquin will be searching for a brightly colored device bolted to the deck and pinging away in the blackness and pressure of the 15,000-foot-deep sea.

Authorities say the El Faro's voyage data recorder, similar to the "black box" on an aircraft, would provide a wealth of data on what befell the ship and the 33 people aboard in the hours before it is believed to have gone down. The ship itself has not yet been located.

Recovering the recorder at such depths could be challenging. Assuming the device can be located, the National Transportation Safety Board will work with the Coast Guard, Navy and other agencies to devise a way to bring it up, likely using a robotic, remote-controlled submersible capable of diving great depths.

"We want to find every bit of information that we possibly can," NTSB vice chair Bella Dinh-Zarr said. "We will be here as long as it takes."

The El Faro lost power and went down in 15,000 feet of water east of the Bahamas last Thursday while attempting to outrun Hurricane Joaquin on its regular route from Jacksonville, Florida, to Puerto Rico, the Coast Guard and ship owner Tote Maritime have said.

The captain reported the ship was listing and taking on water through an open hatch. Then transmissions ceased.

An intensive search over tens of thousands of square miles of ocean turned up one unidentified body in a survival suit as well as large amounts of debris, including a heavily damaged life boat — but no sign of survivors. The Coast Guard announced it was suspending the search at dusk Wednesday.

"Any decision to suspend a search is painful," said Coast Guard Capt. Mark Fedor. "They did all they could."

Hope was fading among family members that survivors might be found.

"The ship went down. And there's no questioning the outcome of that. The ship has gone down, took everybody with it. There's really no speculation to be made," said Mary Shevory, mother of crew member Mariette Wright.

Among the questions that have been raised: What caused the ship to lose power? Did pressure to deliver the cargo on time play a role in the captain and company's decision to press ahead? Was the ship's advanced age — more than 40 years old — a factor? And was the mechanical trouble caused by work that was being done in the engine room at the time?

The recorder, required for all large ships since 2002, would contain radio communications, command discussions on the bridge, the ship's speed and heading, wind speed and radar readings. Generally the recorders retain information from the 12 hours before they enter the water.

The ship, which was soon to be replaced on its Caribbean route to begin work in Alaska, left Jacksonville on Sept. 29 with 28 U.S. crew members and five Polish workers aboard. The Poles were doing preparatory work in the engine room for the El Faro's scheduled retrofitting in the coming weeks, according to Tote executives.

Joaquin quickly developed from a tropical storm to a powerful hurricane, but Tote officials say the ship's captain, Michael Davidson, had an acceptable plan to bypass the storm that would have worked, had the ship not lost power amid 140-mph winds and 50-foot waves.

The NTSB said a key part of the investigation is learning how to prevent similar tragedies. Family members say they hope so, too.

"I am hoping other companies will take a good look at when they're going to ship out," said Shevory, the crew member's mother. "And not do it with a storm coming that can potentially become a hurricane. Which of course, it did."