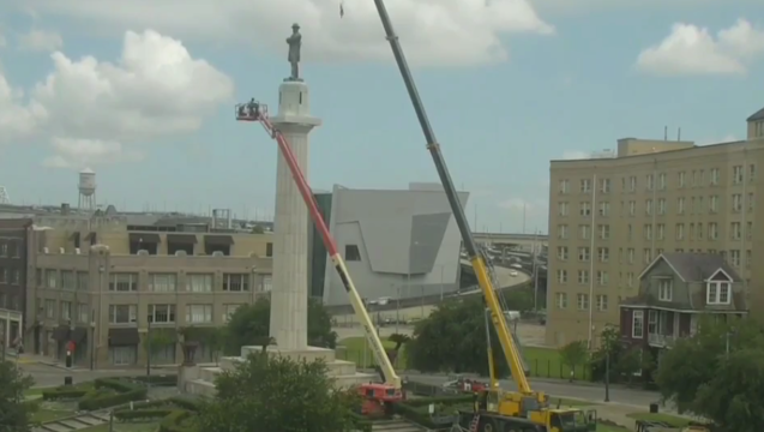 NEW ORLEANS, La. - The city of New Orleans is taking its final steps to separate itself from its Confederate past, removing a prominent statue of Gen. Robert E. Lee on Friday.

The statue of Lee, who commanded Confederate armies fighting the United States in the Civil War, will be taken down from atop a 60-foot (18 meters)-high pedestal where it was been since 1884. It will be the last of four Confederate-era monuments removed by the city after a long and divisive battle over whether old South emblems represent racism or an honorable heritage.

About 100 people were on hand as a huge crane arrived at the monument Friday morning with differing opinions on the removal.

Illinois native John Renner, who is white, said the statue should remain because it represents history. But Al Kennedy, also white and a former New Orleans school board member, supported the removal.

Of the Confederate past, he said: "It's my history, but it's not my heritage."

Mayor Mitch Landrieu, who has pushed the removal of the statues which he said celebrated white supremacy, said this final removal will allow the Louisiana city to "heal and become the city we always should have been had we'd gotten this right the first time."

"It's not good to continue to revere a false version of history and put the Confederacy on a pedestal," Landrieu, who is white, said in an interview with The Associated Press. "We as a nation are far enough from this that we ought to acknowledge that the Confederacy was on the wrong side of history."

And if critics of the removal don't believe that, "the people of New Orleans believe it and we don't want these statues in places of reverence, they need to be in places of remembrance," said Landrieu, who plans a Friday afternoon speech to city residents.

Unlike the first three statues, city officials plan to take Lee's statue down during the day. Landrieu said the change was made to ensure the safety of the workers because of its proximity to electrical wires and New Orleans' famous streetcar lines. It would be impossible to do the removal "at dark and maintain the safety of the construction workers," he said.

Those three statues were taken down in the pre-dawn hours without advance public notice, a precautionary measure after officials said threats were made against contractors and workers involved.

The city plans to have extra security around the Lee statue Friday and will cordon off a one-block radius around Lee Circle to cars in anticipation of protests.

Landrieu had proposed removing the monuments after the 2015 massacre of nine black parishioners at a South Carolina church. The killer, Dylann Roof, was an avowed racist who brandished Confederate battle flags in photos.

"We have to acknowledge that the Confederacy was on the wrong side of history and that the people in the city of New Orleans have the right to honor in places that they own statues or mementos or commemorative matters that reflect our whole history and not just a narrow version of it," the mayor said.

The Robert E. Lee statue was a familiar landmark for tourists and commuters who travel busy St. Charles Avenue by car or on one of the city's historic streetcars. Lee's is the last to be removed in accordance with a 2015 City Council vote.

Of the four monuments, Lee's was easily the most prominent, with the bronze statue alone being close to 20 feet (6 meters) tall. It's an image of Lee standing tall in uniform, with his arms crossed defiantly, looking toward the northern horizon from atop a roughly 60-foot (18 meters)-tall column.

It towered over a traffic circle - Lee Circle - in an area between the office buildings of the city's business district and stately 19th-century mansions in the nearby Garden District.

The city has received offers from public and private institutions to take individual monuments, so it will solicit proposals on where they will go through an "open and transparent selection." Only nonprofits and government entities will be allowed to take part, and the city said the process will not include the Beauregard statue because of legal issues.

The city said those taking the statues cannot display them outdoors on public property in New Orleans.

The city plans to leave the column where Lee's statue stood intact and will mount public art in its place.

The city wants to finish the work during its tricentennial year in 2018.