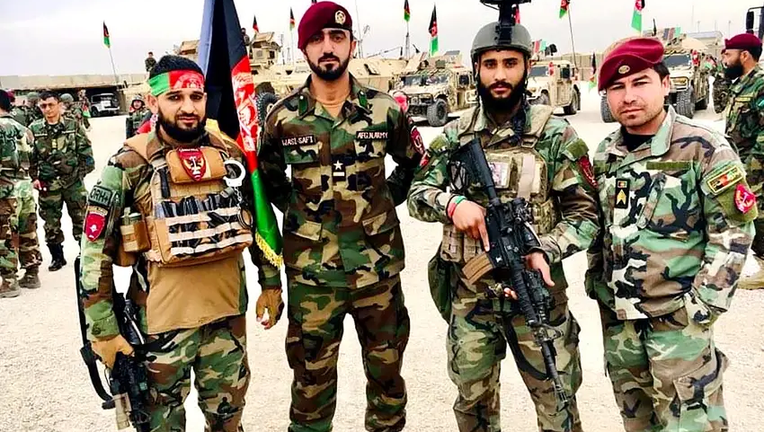 Abdul Wasi Safi stands with his hands behind his back at ease for a photo with others in his Afghan special forces unit. He wears the rank and insignia of a Dvahomi baridman, or second lieutenant. Credit: Courtesy of Sami-ullah Safi (The Texas Tribune)

"Feds drop charges against Afghan soldier trying to claim asylum in Texas" was first published by The Texas Tribune, a nonprofit, nonpartisan media organization that informs Texans — and engages with them — about public policy, politics, government and statewide issues.

A former Afghan soldier who crossed multiple continents trying to escape the Taliban’s revenge and reconnect with his brother in Houston put a potential criminal record behind him after charges of illegally entering the U.S. were dropped Tuesday.

[An Afghan soldier fleeing the Taliban spent months reaching the U.S. to request asylum. He was arrested at the Texas border.]

An assistant U.S. attorney asked a judge this week to dismiss — "in the interest of justice" — the case against Abdul Wasi Safi, or Wasi, who was arrested at the U.S.-Mexico border last year. The judge agreed, according to court records.

Wasi faced up to one year in prison and a fine of up to $5,000 if he pleaded guilty. But Wasi did not want a criminal record starting his life over in the U.S. — especially after his service in connection with the country.

Wasi, a former Afghan special forces officer, crossed the U.S.-Mexico border near Eagle Pass on Sept. 30. Border Patrol apprehended Wasi and charged him with a criminal misdemeanor for failure to present with the necessary documents to remain in the U.S. He spent nearly four months at a detention center under U.S. Marshals custody in Eden Detention Center.

The charges were dropped after months of publicity and a bipartisan congressional effort to free him. Wasi’s case was first reported by The Texas Tribune.

A former soldier from Afghanistan who once worked alongside U.S. troops battling the Taliban is now jailed at the Texas border. Military affairs fellow with the Texas Tribune, Allison Erickson, broke the story. She gives Good Day an update.

RELATED: An Afghan soldier fleeing the Taliban arrested at the Texas border

"I promise you, I’m so happy and it’s a huge relief for me," Sami-ullah Safi, Wasi’s brother, said about the charge dismissal.

Wasi’s journey to Texas began after the U.S. withdrew its military operations from Afghanistan in August 2021, after nearly 20 years of conflict. Wasi — like many Afghans — tried for days to board a military flight out of Kabul. Thousands rushed the heavily guarded tarmac. Few made the final extraction.

Wasi had been a special forces intelligence officer in the Afghan National Security Forces. Those who had served directly with the U.S. and its allies became targets of the Taliban’s revenge killings once they took over in the power vacuum the U.S. left as the Afghan government collapsed.

Wasi took to hiding, fearing the worst for himself and his family as he heard reports of terrible killings of those he had served with in the Afghan special forces.

Wasi studied journalism at university and worked in military intelligence. His work directly aided U.S. special operations missions, often partnering on missions to secure operational areas against the Taliban and other local insurgents. People like Wasi made ideal targets on a Taliban hit list.

For months, Wasi hid with his family in Afghanistan while attempting to find a way out of the country safely. His brother, Sami-ullah Safi, had worked directly with U.S. special forces as a contracted interpreter and lives in Houston as a U.S. citizen. Over the next year, Wasi crossed countries and continents on a dangerous migratory path through Latin America to his arrest at the border.

With the criminal charges dropped, and an expected reunification with his brother, Wasi and his legal team can turn their attention to his asylum case in earnest, which can take years to process.

Cervantes said Wasi’s release may be delayed as federal agencies sort through additional steps. Wasi remains in Border Patrol custody. However, she said, those officials want Immigration and Customs Enforcement to take custody. She doesn’t think ICE will have any issues seeing Wasi’s sincerity.

"He’s definitely not a threat, he’s been vetted [by the FBI]," Cervantes said. "He’s not a flight risk, he wants to be here and he wants to proceed legally."

Most recently, U.S. Rep. Sheila Jackson Lee, a Houston Democrat, pressed the White House to get involved in Wasi’s case, asking President Joe Biden for a pardon. Jackson Lee is expected to host a news conference on Friday, according to a press release from her staff.

Additional members of Congress joined in penning their own letters to the White House including Rep. Dan Crenshaw, R-Houston, and Rep. Mike Waltz, a Florida Republican. Both are both military veterans.

Clarification, Jan. 24, 2023: An earlier version of this article incorrectly characterized Afghanistan as part of the Middle East.

This article originally appeared in The Texas Tribune at https://www.texastribune.org/2023/01/24/abdul-wasi-safi-charges-dropped/.