A man was ambushed by two armed robbers who demanded money while he was in front of his home.

DALLAS - A man was ambushed by two armed robbers who demanded money while he was in front of his home.

The crime happened during the daytime and was captured on doorbell video.

Neighbors said this armed robbery is out of character for the North Oak Cliff area.

Police want to find the ones responsible for creating fear and stealing from a hardworking family man.

The Department of Public Safety said this appears to an isolated incident.

The homeowner was forced to the ground, hit in the face with a gun, and then robbed.

The family shared surveillance video in hopes that someone knows the robbers and turns them in to police. 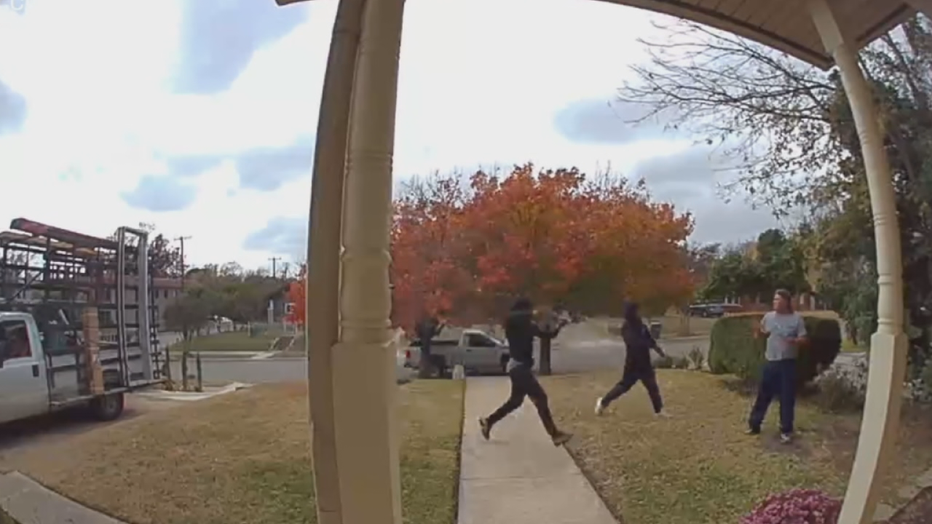 On Wednesday, just after 1 p.m., 52-year-old Jessie Velasquez is seen on home surveillance video tinkering in the yard of his Montclair Avenue home, located in the Winnetka Heights neighborhood of Dallas.

Velasquez was about to step inside for lunch, when suddenly, two armed men wearing masks ambushed him.

“What he did tell me is that these guys are young, violent, and not afraid,” the victim’s wife, Rosalinda Martinez said.

Martinez wasn't home at the time of the attack, but said her dog and father-in-law were.

Velasquez wanted to keep the robbers from going inside.

“They were asking, ‘Hey, what's inside the house? What do you have in the house? Who’s in the house?’” Martinez explained. “My husband, he had a little bit of money in his wallet and he said, ‘You know what, I have some money in my wallet. Fig in there, just get it and go. Please, just leave.’ I guess he got nervous. He just lifted up, tried to get up, and that's when they hit him in the face with the gun.”

The robbers then ran around the corner and disappeared.

“Basically, they sniffed it all the way down the alley, around the corner, so they had a car parked [nearby],” Martinez added.

“There's very little in violent crime here. That is sobering,” said Robert Sharp, who lives nearby.

Sharp has lived in the neighborhood since 1973, and said he's being more alert now during his daytime activities.

Martinez is sharing the disturbing video on social media in order to warn neighbors and friends, and in hopes that somebody knows something.

“You can't let these punks, if I may say that, let you live in fear. You've got to keep living your life,” Martinez said.

Because the robbers were wearing masks, Velasquez couldn't get a good look at them.

They stole his wallet, cell phones, and keys.

The family spent all day Thursday changing the locks.

Anyone with information about this crime is asked to call Dallas police.