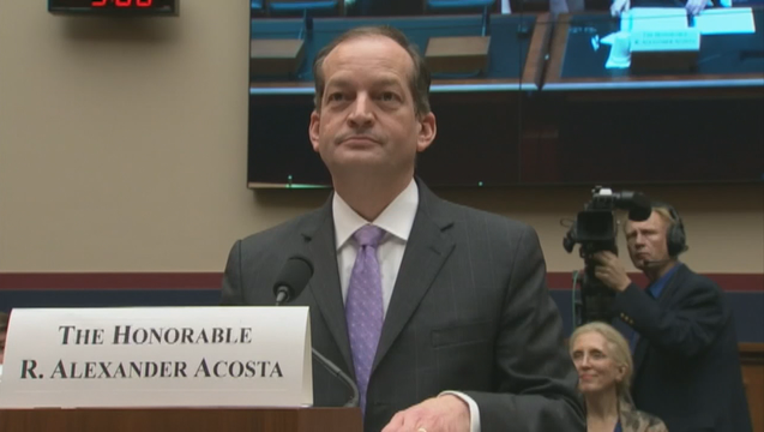 WASHINGTON (AP) - Trying to tamp down calls for his resignation, Labor Secretary Alex Acosta on Wednesday defended his handling of a sex-trafficking case involving now-jailed financier Jeffrey Epstein, insisting he got the toughest deal he could at the time.

In a nearly hour-long news conference, Acosta retraced the steps that federal prosecutors took in the case when he was U.S. attorney for the Southern District of Florida a decade ago, insisting that "in our heart we were trying to do the right thing for these victims." He said prosecutors were working to avoid a more lenient arrangement that would have allowed Epstein to "walk free."

"We believe that we proceeded appropriately," he said, a contention challenged by critics who say Epstein's penalty was egregiously light.

The episode reignited this week when federal prosecutors in New York brought a new round of child sex-trafficking charges against the wealthy hedge fund manager. And on Wednesday, a new accuser stepped forward to say Epstein raped her in his New York mansion when she was 15.

Jennifer Araoz, now 32, told "Today" she never went to police because she feared retribution from the well-connected Epstein. She now has filed court papers seeking from Epstein in preparation for suing him.

While the handling of the case arose during Acosta's confirmation hearings, it has come under fresh and intense scrutiny after the prosecutors in New York brought their charges on Monday, alleging Epstein abused dozens of underage girls in the early 2000s, paying them hundreds of dollars in cash for massages, then molesting them at his homes in Florida and New York. Epstein has pleaded not guilty to the charges; if convicted he could be imprisoned for the rest of his life.

Acosta's lawyerly presentation was an effort to push back against growing criticism of his work in a secret 2008 plea deal that let Epstein avoid federal prosecution on charges that he molested teenage girls. A West Palm Beach judge found this year that the deal had violated the Crime Victims' Rights Act because the victims were not informed or consulted.

He was also out to persuade President Donald Trump to keep him on the job as Democratic presidential candidates and party leaders called for his ouster.

Acosta insisted his office did the best it could under the circumstances a decade ago. He said state authorities had planned to go after Epstein with charges that would have resulted in no jail time until his office intervened and pressed for tougher consequences, a contention that is supported by the record. The alternative, he said, would have been for federal prosecutors to "roll the dice" and hope to win a conviction.

"We did what we did because we wanted to see Epstein go to jail," Acosta said. "He needed to go to jail."

But Epstein only was given 13 months in a work-release program, which let him work out of the jail six days a week. Acosta said it was "entirely appropriate" to be outraged about that leniency, but he blamed that on Florida authorities. "Everything the victims have gone through in these cases is horrific," he said, while repeatedly refusing to apologize to them.

"I think it's important to stand up for the prosecutors" in his old office, he said.

Acosta's South Florida office had gotten to the point of drafting an indictment that could have sent Epstein to federal prison for life. But it was never filed, leading to Epstein's guilty plea to two state prostitution-related charges. In addition to the work-release jail sentence, Epstein was required to make payments to victims and register as a sex offender.

Acosta has said he welcomes the new case, and earlier defended himself on Twitter, crediting "new evidence and additional testimony" uncovered by prosecutors in New York for providing "an important opportunity to more fully bring him to justice."

Pressed on whether he had any regrets, Acosta repeatedly suggested that circumstances had changed since the case arose. "We now have 12 years of knowledge and hindsight and we live in a very different world," he said. "Today's world treats victims very, very differently."

Trump has, so far, also defended Acosta, praising his work as labor secretary and saying he felt "very badly" for him "because I've known him as being somebody that works so hard and has done such a good job."

Though Trump may have made the tagline "You're fired!" famous on his reality show "The Apprentice," he has shown a pattern of reluctance to fire even his most embattled aides. Trump, for instance, took months to dismiss Scott Pruitt as Environmental Protection Agency administrator despite a dizzying array of scandals, and allowed Jeff Sessions to remain as attorney general for more than a year even as he railed at and belittled him.

Trump typically gives his Cabinet secretaries the opportunity to defend themselves publicly in interviews and press conferences before deciding whether to pull the plug. Indeed, he encouraged Acosta to hold Wednesday's press conference laying out his thinking and involvement in the plea deal, according to a senior administration official, speaking on condition of anonymity to discuss internal deliberations.

The key question was whether Acosta's performance had bought him time in Trump's eyes.

Trump has his own long personal history with Epstein, but has dissociated himself from the wealthy hedge fund manager, saying this week the two had a falling out 15 or so years ago and haven't spoken since.

Acosta told reporters that his relationship with Trump remains "outstanding," but also noted that every member of Trump's Cabinet serves at the president's pleasure.

Democratic presidential contenders and party leaders have been calling for Acosta to resign or be fired, and he has been called to testify in front of the House Oversight Committee on July 23. Rep. Debbie Wasserman Schultz, D-Florida, welcomed that move, saying Acosta "has a disturbing record on sexual and human trafficking that stretches from the horribly permissive plea agreement he gave to Jeffrey Epstein, up to his time now as Labor Secretary."

Many Senate Republicans, meanwhile, have taken a wait-and-see approach.