WASHINGTON (FOX 5 DC) - Bob Dole was honored Friday at Washington National Cathedral as top leaders from both parties gathered to display the kind of bipartisanship now rare in modern government, a tribute to the longtime Kansas senator’s ability to practice bare-knuckle politics without losing an overriding sense of civility.

Honoring the life and legacy of Bob Dole

Friends and family joined together on the National Mall today to commemorate the life and legacy of former senator Bob Dole who passed away this week at the age of 98.

Dole’s flag-draped casket was carried in by a military honor guard as the congregation stood and Dole’s wife, former North Carolina Sen. Elizabeth Dole, and daughter, Robin, looked on. Joining top leaders of Congress at the invitation-only ceremony were President Joe Biden, members of his Cabinet and former Republican Vice Presidents Mike Pence, Dick Cheney and Dan Quayle. Bill Clinton, who beat Dole to win reelection as president in 1996 and was recently hospitalized for an infection unrelated to COVID-19, was also on-hand.

"There’s something that connects that past and present, war time and peace, then and now. The courage, the grit, the goodness and the grace of Bob Dole," said Biden, who touched Dole’s casket before speaking and mentioned his "50 years of friendship" with the longtime senator.

The late Senator Bob Dole will be remembered in D.C. on Friday with a Celebration of Life memorial service to honor the distinguished leader who devoted his life to serving the United States.

Biden called Dole a "giant of our time and of all time." The president also said that Dole was worried at the end of his life about American democracy being threatened by today’s bitter political battles — even noting that infighting from both parties "grows more unacceptable day by day."

President Biden, leaders gather to pay tribute to Bob Dole at US Capitol

Bob Dole lay in state Thursday at the U.S. Capitol, as the president and others gathered to pay tribute to a "giant of our history" who served the country in war and in politics with pragmatism, self-deprecating wit and a bygone era's sense of common civility and compromise.

The event will be livestreamed on FOX5DC.COM and on our YouTube channel.

Dole, who died Sunday at age 98, was wounded during World War II, served nearly 36 years in Congress and was GOP Senate leader for more than a decade. In February, he announced he’d been diagnosed with stage 4 lung cancer.

Later Friday, Dole’s casket will travel to the World War II Memorial on the National Mall for a public "celebration of life" featuring Gen. Mark Milley, chairman of the Joint Chiefs of Staff and the U.S. Army Band.

Besides his sharp, often sarcastic tongue, among Dole’s best-known attributes were his pragmatic brand of politics and self-deprecating wit — representing the sense of compromise of a bygone era.

Biden delivered a vivid, visceral eulogy speaking about Dole volunteering for military service and being gravely wounded, and how he came back to "painful" years recovering from the wounds.

"God, what courage Bob Dole had," Biden said, adding that "I found Bob to be a man of principle, pragmatism and enormous integrity" who the president said was devoted to "country, to honor. Literally dedicated to finding the common good." 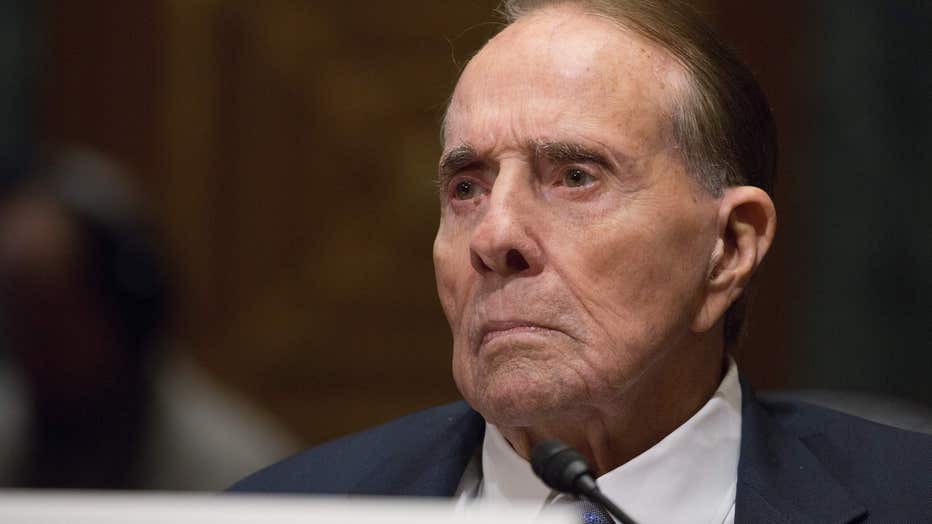 Former Kansas Sen. Pat Roberts told those gathered about Dole’s deep and lasting influence on their home state, and noted that he was able to "let the air out of the partisan balloons." Roberts also highlighted Dole’s work to honor the "Greatest Generation," saying "there would not be" a World War II memorial without Dole using his influence to help make sure it was built.

Dole’s body will later travel to Kansas, where weekend events include a public viewing at St. Mary Queen of Angels Catholic Church in his hometown of Russell. He will later be interred at Arlington National Cemetery.

"No question, Bob Dole left this world a much better place because of his legacy of leadership and service," Mike Ford, chair of the Gerald R. Ford Presidential Foundation and the late President Ford’s eldest son, said in a statement. "As we read the obituaries and see the responses to his passing, my family is struck by the genuine affection expressed across the political spectrum. His warmth, wit, and wisdom will be sorely missed."

Ford selected Dole as his running mate while unsuccessfully seeking to hang on to the presidency in the 1976 election.

Friday’s services followed Dole lying in state on Thursday under the dome of the U.S. Capitol he so loved. Among those paying respects was Quayle, who at one point touched Dole’s casket and said "Bye, buddy."

Born a child of the Dust Bowl, Bob Dole suffered paralyzing and near-fatal wounds after being shot in World War II that sent him home with a severely damaged right arm that he could not use to shake hands. Instead, Dole held a pen in it and reached out with his left as a way to put greeters at ease.

He served as a Kansas state legislator before running for Congress in 1960, joining the House for eight years then going on to win the Senate seat. The 1996 race was Dole’s third and final White House campaign.

Dole’s sense of humor was on display after losing to Clinton. McConnell recalled that when it was time for Dole’s remarks, he stood at the podium and began: "I, Robert J. Dole … do solemnly swear … oh, sorry, wrong speech!"

But that humor was rarely seen on the campaign trail, where it could have helped him win more votes. Instead, Dole was seen as a GOP "hatchet man," a mentee of Richard Nixon and chairman of the Republican National Committee during the Watergate era.

Still, it was during Dole’s long Senate career that he grew to see the value of reaching across the aisle to Democrats and secured his more lasting achievements — most notably the Americans with Disabilities Act that to this day ensures a level of accessibility as a civil right.

Dole also supported civil rights and helped secure a federal holiday named in honor of Martin Luther King Jr., despite then-strong opposition from some in both parties — hard work that Biden saluted on Friday.

"Bob Dole did that," the president said of the holiday.