Joe Biden began the process of selecting a running mate on April 30 with the announcement of a committee to vet potential candidates.

WASHINGTON (AP) - Gov. Gretchen Whitmer wore a T-shirt on television emblazoned with the words “that woman from Michigan,” a cheeky reference to President Donald Trump's dismissal of her. Minnesota Sen. Amy Klobuchar joined her onetime nemesis, Pete Buttigieg, for a friendly virtual chat on a late-night show. And Stacey Abrams speaks of her political ambition to almost anyone who will listen.

The audition to become the next vice president has begun.

And while the coronavirus has upended virtually every aspect of American life, there's one constant: The veepstakes competition that unfolds every four years is one of the most unpredictable, often awkward, rituals of politics. That's especially true this time as the pandemic has overtaken the presidential campaign, forcing those thought to be in the running for the No. 2 spot to be even more creative in getting noticed. 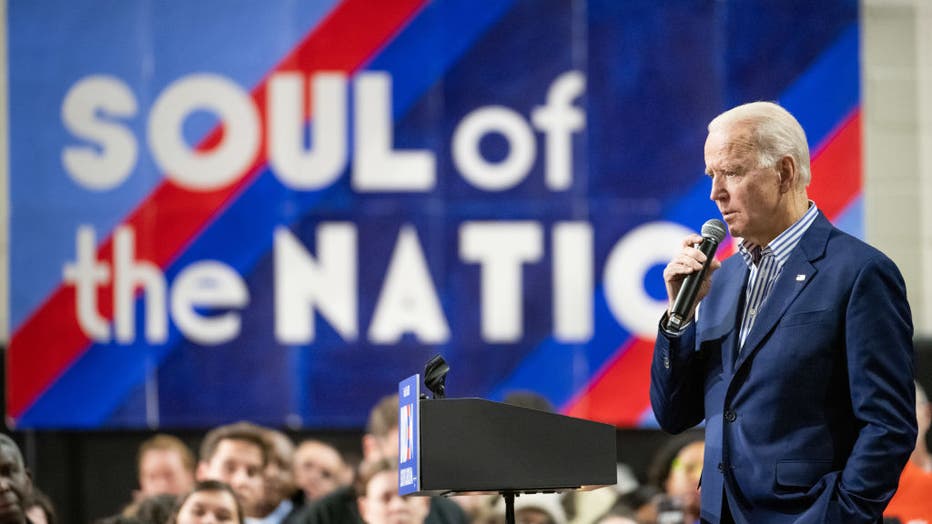 Presumptive Democratic nominee Joe Biden began the process of selecting a running mate in earnest on Thursday by announcing a committee to vet potential candidates. The panel's work will likely last through July, he said, meaning months in which some candidates will appear up one day only to fade and potentially be replaced with someone who isn't on anyone's radar the next.

Scott Reed, who managed Bob Dole's 1996 presidential campaign, said the search for a running mate often takes twists and turns because it's one of the few things a nominee can control after a primary spent largely reacting to surrounding political forces. He said reverberations from the choice can last for years.

“This is the first time in the campaign that the candidate is back in charge of something," he said. “Everyone’s watching. Everyone in the party, world leaders, business leaders and congressional leaders, because, in a way, it lays out the nominee’s decision-making process, and it answers the question, Does he have one or not?”

Biden has limited some of the mystery by promising to pick a woman, a potentially important move as he faces scrutiny after a former Senate staffer alleged he sexually assaulted her in the 1990s. Biden has denied the assault accusation, telling MSNBC on Friday that it “never happened.”

Those thought to be under consideration for the vice presidency typically go to great lengths to avoid talking about it — much less audition for it. But that tradition is fading away this year.

Abrams, the former Democratic Georgia governor candidate, has been vocal about wanting the job, framing her lack of subtlety as the type of honesty her parents instilled in her growing up. Whitmer insists she won't be intimidated by Trump, and Klobuchar has positioned herself as a friendly Midwesterner who can overcome old rivalries.

Others, including Sens. Kamala Harris of California and Elizabeth Warren of Massachusetts, have said they'd accept the vice presidency if Biden offered it.

Final selections can hinge on gut feelings or political calculation. They sometimes are built on personal relationships. Often it’s about arrangements of simple accommodation.

Jimmy Carter, the former Georgia governor and political outsider, in 1976 picked Walter Mondale, a Senate stalwart who boosted the nominee's credibility with Washington power brokers. That same year, Gerald Ford was seen as sometimes overly accommodating politically, which made the take-no-prisoners Senate style of his friend Dole appealing.

By selecting Mike Pence in 2016, Donald Trump helped solidify his standing with religious conservatives. That was crucial when Pence stood by Trump after a tape emerged of him bragging of grabbing women by their genitals, nearly sinking the campaign.

An important part of the modern process is visibility. Most of Biden's possible choices have been on media blitzes. When a decision appears imminent, reporters will scrutinize online flight information, attempting to decipher who is traveling where and when, often camping outside the homes of presumptive choices, hoping to glean clues by their comings and goings.

It wasn't always that way.

Mondale first injected a dose of reality television by winning the 1984 Democratic presidential nomination and summoning potential running mates to his home in suburban St. Paul, Minnesota — attracting a great deal of media attention each time.

“Vice presidents had always been picked in secret and were standby equipment, and it wasn’t considered important, which was stupid,” Mondale said in an interview. “Until we got into it ... and the public started to see that, ‘Yes the vice presidency is important.’"

Like Biden now, Mondale saw the process from both sides, as the chooser and the chosen.

“I had some ideas of what it involved and what I needed to do,” he said. “But I don’t think anybody’s really ready for this.”

Another key factor weighing on Biden's choice is age since, at 77, he would be the oldest American president in history, should he win. Age was thought to have swayed the then-73-year-old Dole in 1996. He selected former Buffalo Bills quarterback Jack Kemp, who was more than a decade younger, despite the pair being longtime adversaries. But Reed said it was more about the element of surprise than making the ticket feel younger.

Perhaps the biggest stunner came in 2008, when John McCain chose Alaska Gov. Sarah Palin, who was little known to most of the country, including McCain himself. The decision initially energized conservatives, but Palin proved uneven on the national stage and, perhaps predictably, a poor personal fit for McCain.

Rep. Cedric Richmond, a Louisiana congressman and a co-chairman of Biden’s campaign, said for all the behind-the-scenes vetting, the decision ultimately lies with Biden.

“You lay out candidates, you articulate the pros and cons of each," Richmond said. "But then he’s got a decision to make.”