Footage of the Endurance wreckage

One of history's most famous shipwrecks has been found off the coast of Antarctica. Credit: The Falklands Maritime Heritage Trust

CAPE TOWN, South Africa - Endurance, the lost ship of renowned polar explorer Sir Ernest Shackleton, has been located more than a century after it sank off the coast of Antarctica.

Endurance was crushed by ice and sank in 1915. Shackleton and his crew of men made a stunning escape — and their story of human survival in the wilds of Antarctica has become one of history’s greatest.

Some 107 years later, the lost ship was found 3,008 meters (or nearly 1.9 miles) deep in the Weddell Sea, an icy part of the Southern (Antarctic) Ocean along the coast of Antarctica. The discovery was announced Wednesday by the Falklands Maritime Heritage Trust, which detailed the team of explorers, marine archaeologists, other researchers, technicians and filmmakers who made up the successful Endurance22 Expedition.

The wooden vessel was found in "a brilliant state of preservation," Mensun Bound, the expedition’s exploration director, said in a statement.

"This is by far the finest wooden shipwreck I have ever seen. It is upright, well proud of the seabed, intact, and in a brilliant state of preservation. You can even see ‘Endurance’ arced across the stern, directly below the taffrail," Bound said. "This is a milestone in polar history." 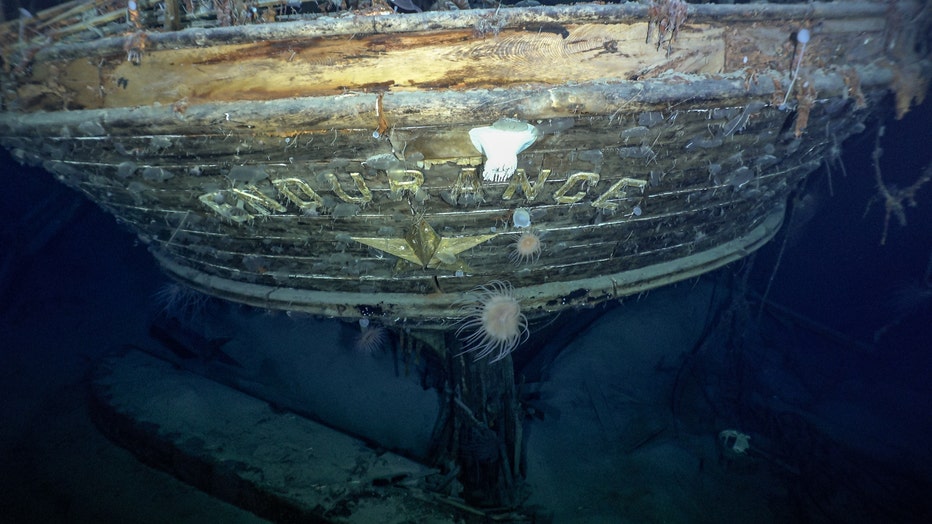 The stern of the Endurance with the name and emblematic polestar. (Credit: Provided / Falklands Maritime Heritage Trust)

The expedition’s organizer shared stunning images and videos of the shipwreck, which is set to also be detailed in a National Geographic documentary in the fall.

What happened to Ernest Shackleton’s ship?

Endurance set sail for Antarctica on Dec. 5, 1914, carrying Shackleton and 27 others. The crew had the goal of reaching the South Pole and ultimately crossing the continent on land, according to National Geographic.

But disaster struck when the ship became trapped in pack ice near Antarctica and the crew was forced to spend the winter in the frozen landscape. The wooden vessel eventually sank after being stuck in the ice for roughly 10 months.

After the ship sank, the crew was forced to make their way by sea to the uninhabited Elephant Island, according to the account by National Geographic. Shackleton and five men then set off in a lifeboat to seek help from a whaling station in South Georgia, more than 800 miles away.

"After several attempts, Shackleton eventually made it back to Elephant Island to rescue his crew and, miraculously, all of the men under his command in the Weddell Sea survived two years in the wilds of Antarctica, making it one of history’s great stories of human survival," the account states.

Shackleton, who died of a heart attack on Jan. 5, 1922, at age 47, was among the polar explorers who made important contributions to our knowledge of the fragile environment of Antarctica.

The expedition to locate the lost shipwreck, which for over 100 years had remained inaccessible, began on Feb. 5 when the South African icebreaker Agulhas II set sail from Cape Town.

The Endurance wreck appears to be well preserved due to the lack of wood-eating microbes in the Weddell Sea, the team said. It will remain untouched and without any artifacts removed, as it is protected as a Historic Site and Monument under the Antarctic Treaty.

The Falklands Maritime Heritage Trust said it hopes the Endurance22 expedition will "raise awareness of the value of exploration, of increasing our environmental awareness and of scientific study."