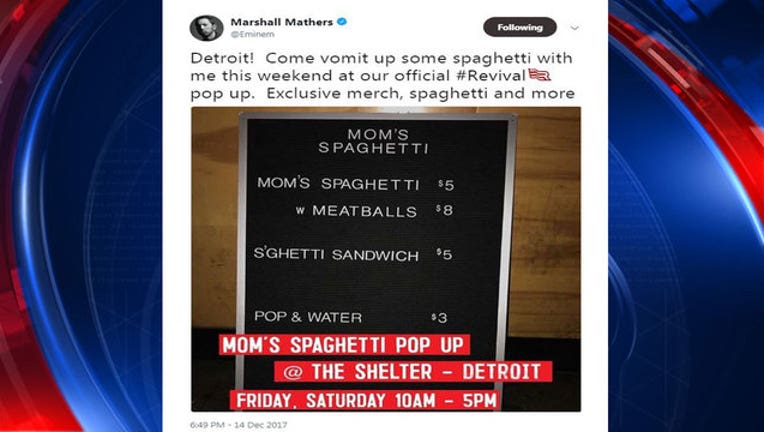 (WJBK) - Fans get a chance to dine with Eminem at a surprise Mom's Spaghetti pop-up in Detroit this weekend.

A three-day event, it will run from Friday through Sunday at the Shelter Basement Club, underneath St. Andrew's Hall in Detroit. The pop-up runs from 10 a.m. to 5 p.m. Friday and Saturday and noon until 5 p.m. Sunday at the Shelter, 431 E. Congress, featured in the film 8 Mile, where he played a character loosely based on Em's life.

Eminem, also known as Marshall Mathers, tweeted on Thursday: “Detroit! Come vomit up some spaghetti with me this weekend at our official #Revival pop up. Exclusive merch, spaghetti and more."

The pop-up is in conjunction with his new album, "Revival" which is expected to be released Friday.

The pop-up is a reference to his hit "Lose Yourself" which includes the lyrics: “His palms are sweaty, knees weak, arms are heavy / There’s vomit on his sweater already, mom’s spaghetti.”