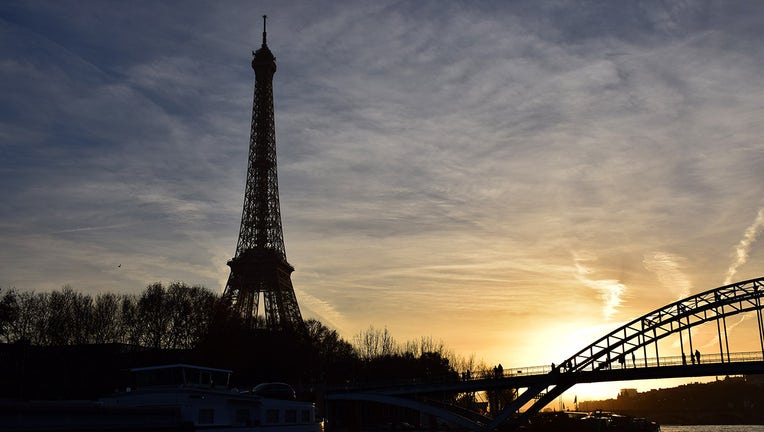 The Eiffel Tower at sunset, seen from the Seine. (FOX photo)

PARIS - Lights on the Eiffel Tower will soon be turned off more than an hour earlier at night to save electricity, the Paris mayor announced Tuesday, as Russia's war in Ukraine deepens an energy crisis in Europe.

Mayor Anne Hidalgo said the iconic tower that is normally illuminated until 1 a.m. is only one of the city's monuments and municipal buildings that will be plunged into darkness earlier in the evening as the French capital — like the rest of France and Europe — faces risks of power shortages, rationing and blackouts when energy demand surges this winter.

Russia has reduced natural gas supplies to several European countries as they support Ukraine, sending prices for gas and electricity surging. It's fueled inflation and raised fears about shrinking supplies as the heating season draws near, forcing countries to enact conservation measures and relief for consumers and businesses. While some European companies have reduced or halted production as energy prices surge, the European Union is looking to pass proposals to ease the crisis.

"It’s a symbolic, but an important step," Hidalgo said, brushing off criticism that Paris authorities could do more to reduce energy consumption by 10% — the target set in July by President Emmanuel Macron as part of a nationwide "sobriety plan" to conserve energy.

RELATED: Shops in Spain must set A/C no lower than 81 degrees to save energy

For safety reasons, streetlights will stay on across Paris and the ornate bridges over the Seine River also will remain illuminated at night, Hidalgo told reporters.

To align with France's savings plan, she said she will press the government to adjust the lighting on national monuments in Paris, such as the domed Pantheon and the Arc de Triomphe, the famous Napoleonic arch that dominates the Champs-Elysees Avenue.

Paris authorities also aim to save energy by moving back when they turn on the heat in public buildings by a whole month, from mid-October to mid-November. They also plan to lower the temperature in public buildings by 1 degree, from 19 to 18 degrees Celsius (66 to 64 degrees Fahrenheit) during office hours, and to 16 C after hours and on weekends.