A Bay Area woman's video has gone viral, as she's seen showing up at her 10-year-old nephew's school in a limousine.

SAN FRANCISCO - A Bay Area woman has been receiving a lot of attention and an outpouring of praise for a touching birthday surprise she sprung on her nephew for his 10th birthday.

Video posted by Nita Fisher last Thursday, showed her nephew Dante Johnson at the end of his school day outside Bessie Carmichael School in San Francisco. He was seen casually walking down the sidewalk with his mother, when his aunt launched her surprise. Fisher and her mother (Dante’s grandmother) were hiding out in a black stretch limousine parked on the street. They patiently waited for the child to get close, and that’s when Fisher rolled down the window, popped her head out and yelled out, "What’s uuuuuup! Happy Birthday!"

The precious response from the young boy said it all. His mouth gaping wide open, the child could not say anything. He just turned around in shock, head down, a smile busting from his face, before making his way back to the limo.

"He was speechless," Fisher told KTVU. "He couldn't even find words, and that was why he had to walk off. He was in disbelief."

In a tweet, sharing the now viral moment, the 31-year-old Richmond woman wrote, "my nephew said he never saw a limo in real life, so i surprised him & pulled up to his school in one for his birthday."

In the video, when Dante was seen finally able to take in what was happening, he said to his aunt, "I thought you were at work."

To build up the surprise, Fisher had texted her nephew earlier to tell him she was wishing him a happy birthday from work.

"You thought I was at work? I was at work, but I had to leave early because it’s your birthday. You turned 10 today!" Fisher exclaimed, adding, "I had to come pick you up right!"

The next three hours of the newly minted 10-year-old’s life was one he’ll never forget, filled with hugs, celebration and fun as he was treated like a celebrity and king.

The limo driver graciously opened the door for the birthday boy who stepped into a party on wheels. Fisher had the interior of the limousine decked out with balloons, as the apple cider was flowing, and the music was blasting.

The aunt said as she planned the surprise, she had a specific image in her mind of what she wanted the celebration to look like: Think Macaulay Culkin’s character, Kevin McCallister, in "Home Alone 2."

"I knew what I wanted for him," the triumphant auntie explained. "Always thought of him in the ‘Home Alone’ pictures with the pizza and the coke and the champagne glass."

Fisher did such a good job recreating that scene, she tweeted a side-by-side of Dante and Kevin McCallister, champagne flute in hand, pizza box within reach, and both living large in their limo ride.

The birthday excursion also allowed the young man of the hour to be a tourist in his own town. Fisher, her sister and the child’s grandmother accompanied Dante to Fisherman’s Wharf, where the limo dropped them off to walk around. 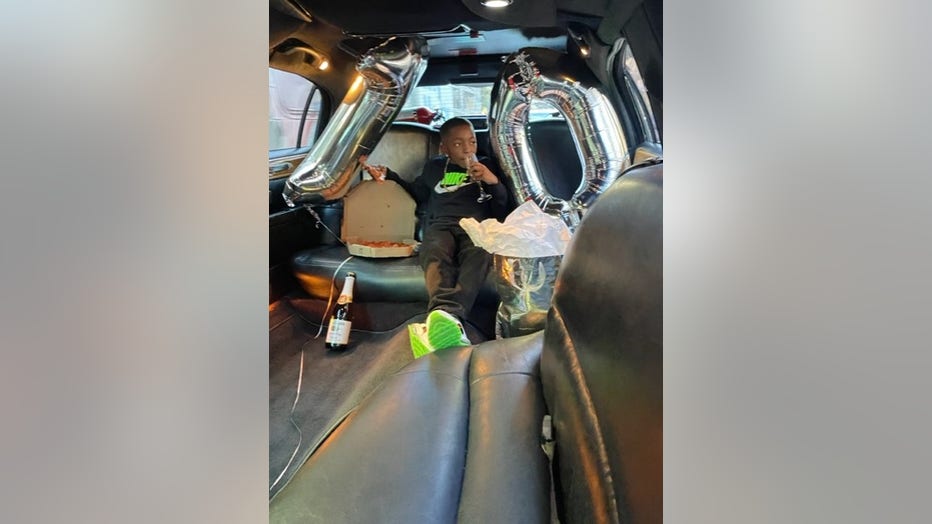 Nita Fisher of Richmond surprised her nephew with a limo ride for his 10th birthday on Jan. 27, 2022. Video of the surprise has since gone viral.

They visited with the sea lions at Pier 39 and treated Dante to his favorite -- donuts. They also picked up his cousin, before being dropped off for part two of his birthday celebration at Century San Francisco Theater for a special movie viewing.

The party planning skills came easy for the aunt. While her work during the day was as a receptionist for Kaiser’s audiology department in San Rafael, she also co-owned an event planning business, Fisher explained.

Throughout the entire celebratory adventure, she said her nephew was just incredulous, and he was so appreciative.

"This is wow. This is really happening," he told her, declaring, "I'm just living my best life."

Since posting the video on Twitter, it's been viewed more than 2 million times. Fisher has received more than 23.7K retweets, and the comments have been pouring in.

People have applauded her for going above and beyond the call of auntie duties. Many said they got emotional watching the heartwarming surprise. Others said she inspired them and that her thoughtfulness and loving act would create lifelong memories.

"This is absolutely beautiful. He's going to cherish this forever," commented @SweetLadyThck1.

One Twitter user encouraged Fisher to continue with the good work and praised her for her role in the child’s life. "Aunties like you make strong spoiled black men like myself… KEEP GOING," wrote @jacksondion22.

Others lauded Dante for his reaction and his polite manners. In the midst of the excitement, the video showed how the child made a point to stop and thank the limousine driver for his birthday wishes.

"This baby gentleman so politely thanked the driver when he wished him a happy birthday," noted @NightBreeze1079.

And @ToddIngram9 wrote, "This young man taking a moment to acknowledge a happy birthday wish with a thank you is a testament to his character and his upbringing. Well done and Happy Birthday young man!"

Fisher, known as T.T. to her nephew, said it’s not that hard to go above and beyond for her little guy. For his 9th birthday, she said she surprised him with a trip to Sacramento to watch a World Wrestling Entertainment (WWE) event.

"He's so appreciative, so it’s easy to do things for him," the proud aunt said. "He’s very charismatic. Everyone loves him," she shared, adding that he's a wonderful kid, did well in school, was a top athlete and a musician too, playing the trumpet.

Asked why she thought her video resonated with so many, Fisher speculated that perhaps it was the pure reaction from the child and the loving bond that could be clearly seen between aunt and nephew.

"I think it's just a genuine act of kindness, especially in a sad time that we're going through. Something light and positive," the aunt said. "I'm honored and humbled by this whole experience."

And for her nephew, for whom she would give the world, she cherished the strong bond they shared as she celebrated this moment with him. "Our relationship is really close. He’s almost like my son," Auntie T.T. said, "I just want him to be exposed to as much good things as I can." 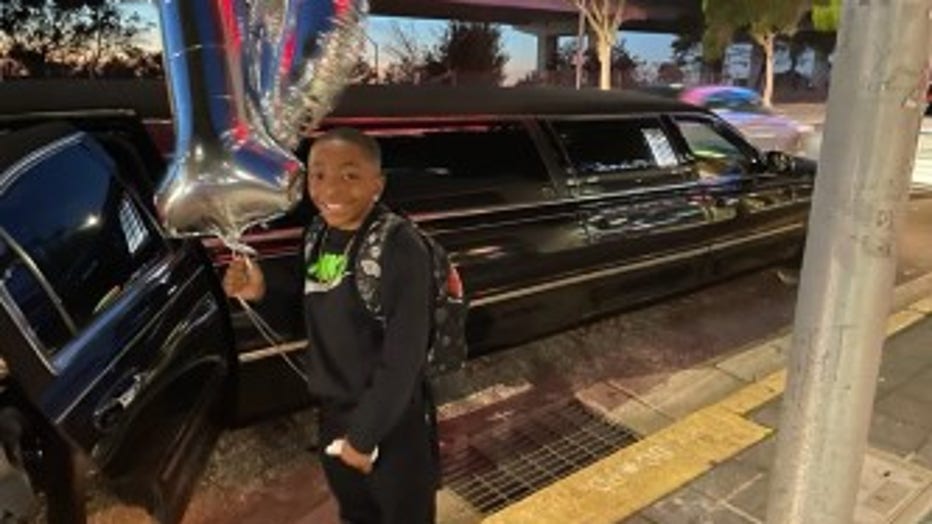 Nita Fisher treated her nephew Dante Johnson to a birthday surprise for his 10th birthday on Jan. 27, 2022. Her video of the surprise has since gone viral. (Nita Fisher)