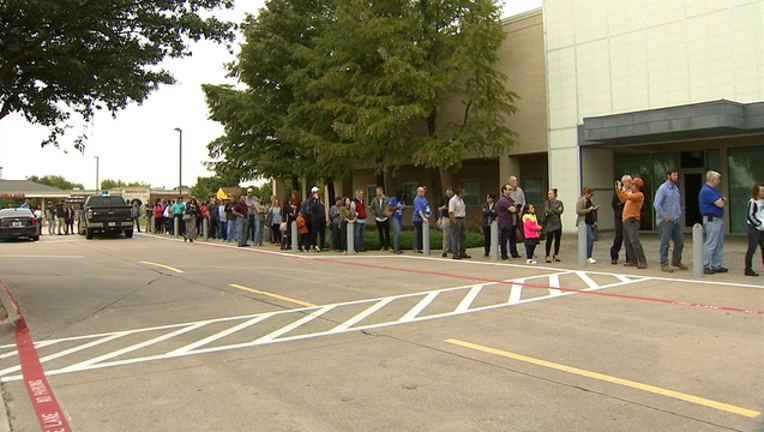 It took Harris County, which includes Houston, less than six hours to set a new opening day of early voting record for midterm elections with more than 36,000 votes cast - exceeding the around 26,000 ballots cast there during the 2010 midterms, County Clerk Stan Stanart told the Houston Chronicle.

Dallas County was also flirting with surpassing the first-day turnout of 2016 - an unusual feat since turnout in presidential election years is typically higher.

Dallas County Judge Clay Jenkins said 55,000-plus people had voted Monday, and that blows past the 29,217 who early voted in the 2014 midterm.

At one polling place in Plano, the wait in line to vote early Monday afternoon was about 30 minutes.

"I just wanted to come the first day and get it out of the way," said Rahim Sewani, one of those in line. He said the line "was moving pretty fast" and that the election workers "know what they are doing, so it wasn't bad at all."

Democratic U.S. Rep. Joaquin Castro of San Antonio held a news conference to complain about a lack of polling station personnel and computer glitches adding to wait times at one ormorelocal voting station. He also complained that voting machines in some areas provide no paper record of ballots cast.

Suresh Nayak said he has lived in Texas for 30 years and Monday was the first vote he has ever cast.

"I was waiting for this. The way things are going, I couldn't wait to vote," Nayak said, though he declined to say for whom he voted.