Saturday morning, dozens of people went “Over the Edge” for a great cause at the Union Dallas Building on North Field Street.

DALLAS - Saturday morning, dozens of people went “Over the Edge” for a great cause at the Union Dallas Building on North Field Street.

They took on that challenge by rappelling down the side of the building to raise money for Special Olympics Texas and to make a difference in our community.

Stacey Johnson takes pride in being a long-time athlete with the Special Olympics.

"I do three sports,” she said. “I do track and field, I do bocce ball, and the equestrian."

She's also as brave as they come.

It's her third year to take part in the “Over the Edge” event, rappelling 15 stories down the Union Dallas Building.

It is also a law enforcement torch run event. 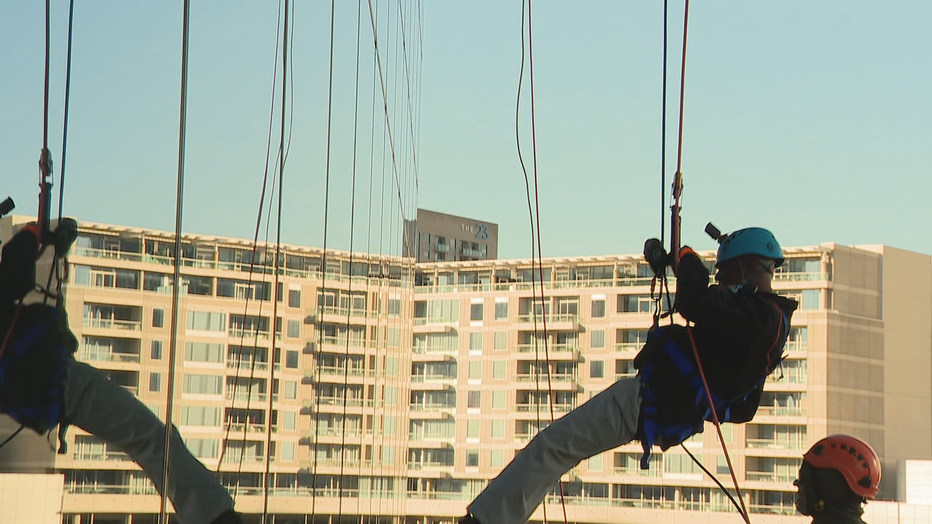 "It's important that the community sees that we do do things outside of our job description. So yeah, I think it's a good opportunity for us to connect with the community and the people that we care about," said Tomeshia Branno, with the Beford Police Department.

Grand Prairie Police Department Deputy Chief Larry Simmons told FOX4 how it felt to go from the rooftop down to the 8th floor.

Dallas Police Chief Renee Hall also rappelled down the building on Friday. She was one of the first ones to take on the challenge.

“It is a challenge to face,“ said Kristi Crone, with Special Olympics Texas. “Whether you have a fear of heights or you just are nervous of going over, but it’s nothing compared to the challenges our athletes face every day."

This allows Special Olympic athletes to continue doing what they love.

"If I wouldn’t have Special Olympics, I wouldn’t be doing good as I am today, because I was in a wheelchair, a walker. I had surgery, and after surgery, I couldn’t sit up and walk. So I had to re-learn everything over again, so I’m really good now," Johnson added.