Downtown Dallas businesses board up, add security ahead of Election Day

There is no clear threat of post-election violence in Dallas or any other part of North Texas. However, that's not stopping local businesses from boarding up their windows ahead of the election.

DALLAS - There is no clear threat of post-election violence in Dallas or any other part of North Texas.

However, that's not stopping local businesses from boarding up their windows ahead of the election. They're still shaken after the George Floyd protests over the summer.

The Downtown Dallas neighborhood association is hiring additional security to patrol the area.

The Dallas Police Department says it has activated its emergency operations center.

The county judge has said there has been no credible threats of violence.

Still, many Downtown Dallas business owners and residents are preparing for possible protests. Shop owners are boarding up their stores worried the election’s outcome could spark another round of violent protests and riots. 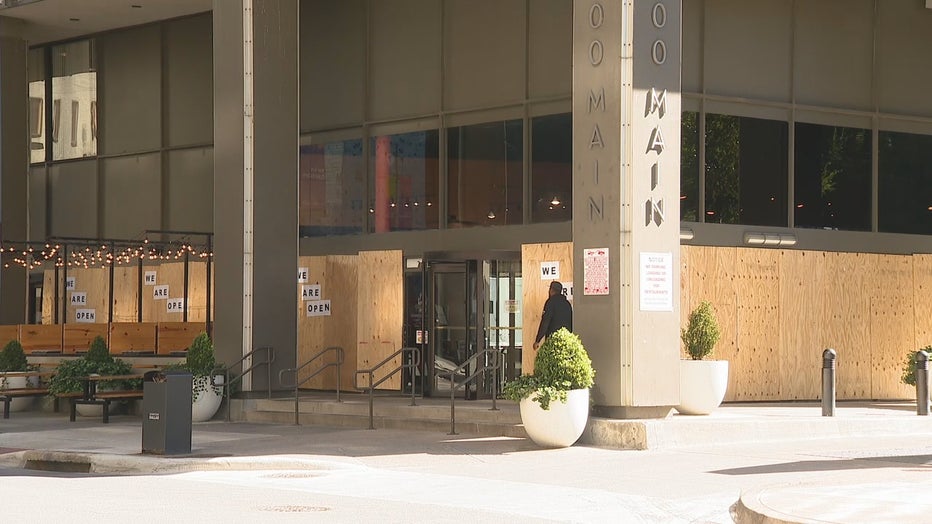 “I totally expected it because we don't know what Tuesday is going to bring, Wednesday or the days following,” said downtown resident Natalie Haddad.

Haddad lives in an apartment building near the Nieman Marcus store located off Main Street. The department store was among several businesses heavily damaged during protests in May sparked by the death of George Floyd.

According to city of Dallas, protests resulted in about $5 million in property damage, including three police cars that were burned and others that were vandalized. DPD says it spent just shy of $3 million responding to the protests.

Haddad's building was vandalized in May. She says management boarded up this time as a precaution.

“But I don't think it comes as a surprise,” she said. “After the George Floyd protest, everything was busted. Everything was broken here at this property.”

The Dallas Police Department has activated its emergency operations center. A spokesperson says all sworn personnel will be required to be in uniform and be ready to respond if the need arises.

“Our DDI security team is at its highest staffing levels to date,” said Kourtny Garrett, with Downtown Dallas Inc. “And we've decked out their uniforms and equipment so they are more visible than ever.”

Last week, Gov. Greg Abbott said the Texas National Guard will be used to protect cities if there are violent protests following the outcome of the election.

Haddad says she won't be home.

“I think I'm going to try and stay somewhere else just because of my experience during the George Floyd protest in May,” she said.

A DPD spokesperson says for strategic reasons, the deployment of resources and manpower will not be disclosed, but they added that "response and mobile field force teams" have been identified and are currently refining their training.