Arkansas oncologist erases more than $650,000 of his patients’ debt

Dr. Omar Atiq, an Arkansas oncologist, recently erased more than $650,000 of debt for his patients.

PINE BLUFF, Ark. - Dr. Omar Atiq, 60, sent out greeting cards before Christmas to nearly 200 patients of the Arkansas Cancer Clinic, notifying them that their outstanding balances were forgiven.

"Arkansas Cancer Clinic is closing its practice after over 29 years of dedicated service to the community," Atiq wrote in part. "The clinic has decided to forego all balances to the clinic by its patients." 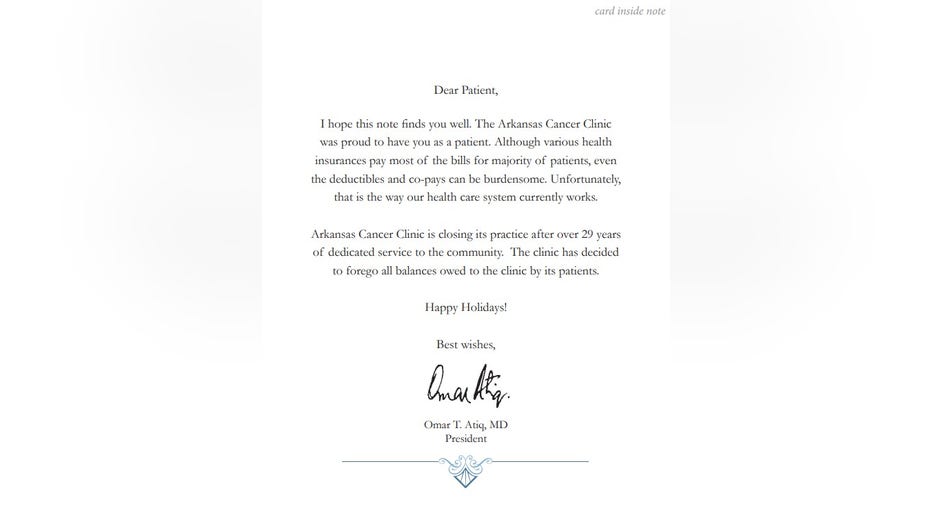 Atiq closed the clinic in February due to staffing shortages after treating thousands of patients for nearly three decades. He worked with a collections agency to bill patients for their outstanding amounts. He said some patients owed tens of thousands of dollars.

Around March, he started to erase debts that were less than $100. That was around the same time the COVID-19 pandemic began, plunging millions of Americans into unemployment and financial hardships.

As the pandemic and economy worsened, Atiq and his wife decided to write off all of his patients’ debts.

"People have lost jobs. People have lost income. People are just in bad situations," Atiq told FOX Television Stations Tuesday. "And we said ‘Well... why don’t we just write it off?’"

He then went to the collections agency and told it to stop billing patients.

RELATED: Supermarket buys nearly $200,000 in restaurant gift cards, hands them out to employees

Atiq said many of his patients wrote back to him, thanking him for the grand gesture that has now received international attention.

"It’s not fair for people, who get sick, for them to worry about paying to get better," he explained.

Atiq currently works as a professor at the University of Arkansas Medical Services and oncologist at the UAMS William P. Rockefeller Cancer Institute. He was born and raised in Pakistan and moved to the United States in 1985 to train and practice medicine.

He said he hopes his actions will inspire his colleagues in the industry to make health care more affordable and accessible.

"This might encourage what I was already trying to do," he added. "And I’m hoping and praying that we continue to be blessed to have these opportunities to be of a little assistance to our fellow human beings."