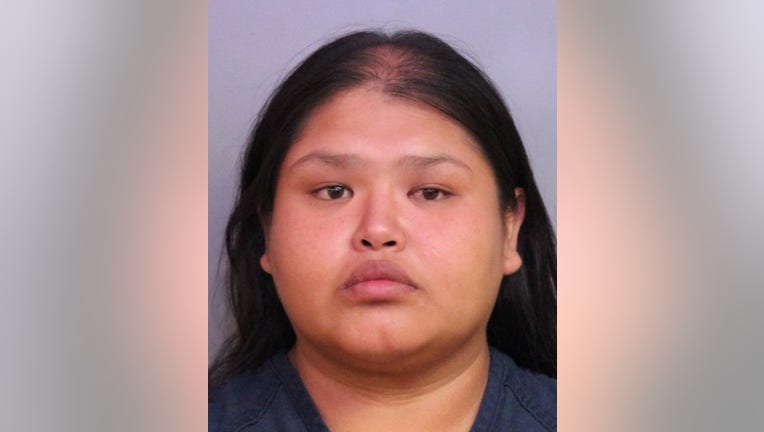 BARTOW, Fla. - A 4-month-old child had a fractured skull and multiple bruises at the time of her death, leading to the arrest of a Bartow woman, according to the Polk County Sheriff's Office.

On Wednesday, detectives arrested 28-year-old Samantha Mariel Angeles-De La Rosa on murder and child abuse charges. They said the baby was in her care, but didn't specify her relationship to the child.

Around 9:45 p.m. Tuesday, the sheriff's office and first responders arrived at Angeles' home where the baby -- who had bruises on her body, head and face -- was found unresponsive, officials said. About an hour later, the victim passed away after she was taken to Winter Haven Hospital.

Deputies said Angeles told them a toddler inside the home pulled the baby off of a changing table and onto the floor, causing the injuries. She also said the toddler has been "rough" with the victim in the past, and used toys to strike the baby in the face, according to Angeles' arrest affidavit.

However, detectives said an autopsy showed the baby had a fractured skull causing a brain bleed and contusions. The medical examiner said those injuries could have not been caused by a two or three-foot fall onto carpet.

The medical examiner also said there were two healing rib fractures and one healing fracture caused by "significant force" that was "not consistent with an accident and injuries were caused by intentional force." He ruled that the manner of death was homicide.

Following the autopsy results, detectives said they interviewed Angeles again. They said she told them she previously pulled the baby out of the car seat, and the baby's arm was caught in the seat belt.

Angeles also said she recently got mad and squeezed the victim hard around the abdomen, causing her to cry, officials added. The incident occurred "over the last several weeks." Detectives said she continued to blamed the baby's death on the toddler who pulled the victim off the changing table.

Later in the interview, detectives said Angeles admitted she was changing the victim's diaper Tuesday morning, and the victim was crying.

According to her affidavit, Angeles began thinking about "how overwhelmed she is in life," and she began crying too. Then, Angeles "lost it in a split second," grabbed the victim's shoulders and struck her head two times against the wood frame of the changing table, the affidavit read.

“There is absolutely no excuse to hurt a baby," Sheriff Grady Judd said in a statement. "We will hold this woman accountable for her actions. If anyone caring for a child is feeling overwhelmed or out of control, please seek help from family, friends, clergy, or a social services agency. Get help."

The sheriff said if anyone is aware of someone harming a child, they should report it to their local law enforcement agency or call the Department of Children and Families Abuse Hotline at 1-800-962-2873.