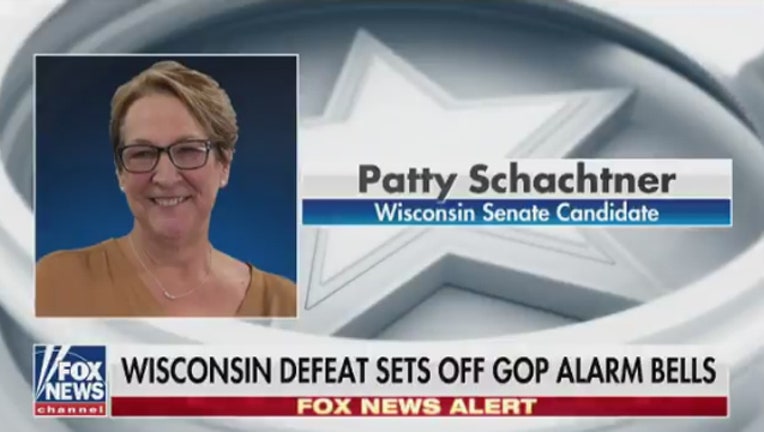 Patty Schachtner's victory over an incumbent Republican state representative in Wisconsin's 10th Senate District follows a series of Democratic wins across the country. Republican Gov. Scott Walker, who is up for re-election to a third term in November, took note, posting on Twitter minutes after Schachtner's win calling it a "wake up call for Republicans in Wisconsin."

Schachtner took 55 percent of the vote to Jarchow's 44 percent in unofficial returns. Schachtner, who entered the race in northwestern Wisconsin as the clear underdog, attributed her stunning victory over Rep. Adam Jarchow to what she called a "kind campaign."

"People sent a message tonight: We don't want to be negative anymore," she said Tuesday. "Change it up. ... My message has always been be kind, be considerate and we need to help people when they're down."

The flip is particularly notable in Wisconsin, where Democratic numbers are at their lowest since 1971 in the state Senate and 1957 in the Assembly. As to whether her victory could be a harbinger of more Democratic wins, Schachtner said simply: "It certainly could be."

Democrats have already made big gains elsewhere, including picking up 15 seats in the Virginia state House in November, and in Alabama, where Doug Jones captured a U.S. Senate seat last month.

In the past two weeks, high-profile Republicans have passed up Senate races in North Dakota and Minnesota that were thought to be winnable seats. Former Minnesota Gov. Tim Pawlenty cited the tough outlook as one reason for skipping a run to replace former Democratic Sen. Al Franken.

Democrats still have a long way to go in Wisconsin. Even with Schachtner's win, Republicans hold an 18-14 majority in the state Senate with one open seat. Walker has refused to call a special election for that seat, currently held by a Republican, meaning it will remain unfilled all year until a replacement is selected in the fall. The November election will determine control of the state Legislature.

The state Senate district Schachtner won has trended red for years. Mitt Romney won it by 6 points in 2012 and Trump won it by 17 points in 2016. Former Republican Rep. Sheila Harsdorf held the seat from 2001 until November when she resigned to become Walker's agriculture secretary.

But Democrats banked that an anti-Trump backlash could even the playing field. Republicans sensed it, too. Conservative groups Americans for Prosperity and the Republican State Leadership Committee both ran ads supporting Jarchow and Republican state Sen. Leah Vukmir, who is running for U.S. Senate, traveled to the district to campaign for him.

Schachtner, the St. Croix County medical examiner and a Somerset school board member who appeared in a 2006 episode of "Wife Swap," didn't appear to want to focus on what her win could mean for Democrats across Wisconsin and the country, saying "right now I'm just focused on District 10."