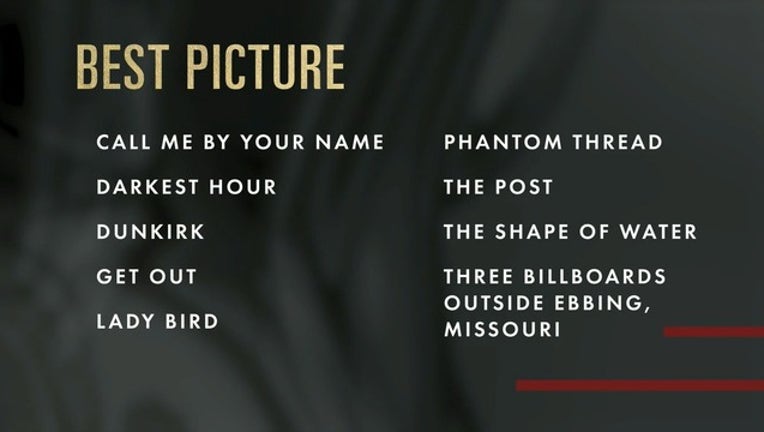 "The Shape of Water" landed just shy of tying the record of 14 nominations by "All About Eve," ''Titanic" and "La La Land." Del Toro's dark fantasy, a Cold War-set ode to outsiders, scored a wide array for nominations for its cast (Sally Hawkins, Richard Jenkins, Octavia Spencer), del Toro's directing, its sumptuous score (by Alexandre Desplat) and its technical craft.

"We are living in times where ideology can make us believe the myth of 'us and them,' quote unquote," del Toro said by phone Tuesday from Los Angeles. "You realize that we are all, in some way or another, a bit of an outsider in different ways. Not fearing the other but embracing the other is the only way to go as a race. The urgency of that message of hope and emotion is what sustained the faith for roughly half a decade that the movie needed to be made."

The cascading fallout of sexual harassment scandals throughout Hollywood put particular focus on the best director category, which for many is a symbol of gender inequality in the film industry. Gerwig follows only Lina Wertmuller, Jane Campion, Sofia Coppola and Kathryn Bigelow, the sole woman to win (for "The Hurt Locker").

Also nominated for best director was Peele. He becomes the fifth black filmmaker nominated for best director, and the third to helm a best-picture nominee, following Barry Jenkins last year for "Moonlight." He's also the third person to receive best picture, director and writing nods for his first feature film after Warren Beatty ("Heaven Can Wait") and James L. Brooks ("Terms of Endearment").

"What's the opposite of the Sunken Place?" said Peele on Twitter.

Denzel Washington ("Roman J. Israel, Esq.") was nominated for best actor, likely eclipsing James Franco ("Disaster Artist"). Franco was accused of sexual misconduct, which he denied, just days before Oscar voting closed. The category's other nominees were a retiring veteran - Daniel Day-Lewis for what he's said is his final performance ("Phantom Thread") - and a pair of breakouts: Timothee Chalamet ("Call Me By Your Name") and "Daniel Kaluuya ("Get Out").

Christopher Plummer, who replaced Kevin Spacey in Ridley Scott's "All the Money in the World," also sneaked into the best supporting actor category. Added to the film in reshoots little more than a month before the film's release, 88-year-old Plummer is the oldest acting nominee ever.

Perhaps most unexpected was the broad success of Paul Thomas Anderson's "Phantom Thread," which scored not only nods for Day-Lewis and Lesley Manville, for best supporting actress, but also nominations for best picture, Anderson's direction, costume design and Johnny Greenwood's score.

Anderson likely displaced not only Steven Spielberg ("The Post") but Martin McDonagh, the director of the film many have tapped to win best picture, "Three Billboards." His absence is a major knock for a film that has endured the harshest backlash of the contenders, with many claiming it's out of touch in matters of race.

Though the favorites are largely independent films, a number of blockbusters fared well, including five nods for "Blade Runner 2049," four for "Star Wars: The Last Jedi," three for "Baby Driver," two for "Beauty and the Beast" and two for Pixar's "Coco," which is up for best animated feature. Still, Patty Jenkins' "Wonder Woman," which became the highest grossing movie ever directed by a woman, failed to receive any Oscar nods despite an awards campaign.

But the box-office hit that carved the most unlikely path to the Oscars was "Get Out." It opened back in February on Oscar weekend, and went on to pocket $254.7 million worldwide. It scored four nominations.

Though many minorities were still absent from the acting categories, the film academy, which has worked to diversify its membership, put forward a field of nominees almost as diverse as last year when "Moonlight," ''Fences" and "Hidden Figures" powered a rebuttal to the "OscarsSoWhite" backlash of the two years prior. Four black actors - Washington, Kaluuya, Spencer and Mary J. Blige ("Mudbound") - are among the 20 acting nominees.

Meryl Streep, who stars as Washington Post publisher Katharine Graham in "The Post," notched her 21st Oscar nomination. She was joined for best actress by McDormand, Hawkins, Saoirse Ronan ("Lady Bird") and Margot Robbie ("I, Tonya").

"I am honored beyond measure by this nomination for a film I love, a film that stands in defense of press freedom, and inclusion of women's voices in the movement of history," Streep said in a statement. "Proud of the film, and all her filmmakers. Thank you from a full heart."

The 89-year-old French filmmaking legend Agnes Varda, an honorary Oscar winner this season, is also up for best documentary for her co-directed "Faces Places." The other nominees are: "Abacus: Small Enough to Jail," ''Last Men in Aleppo" and two Netflix entries: "Icarus" and "Strong Island." Yance Ford, the director of "Strong Island," about Ford's investigation into his brother's 1992 murder, becomes the first transgender filmmaker nominated for an Oscar.

Some had lobbied for "A Fantastic Woman" star Daniela Vega to become the first transgender actor nominated. While Vega didn't garner a nomination, her film, from Chile, landed in the best foreign language category. The other nominees are: "The Insult," from Lebanon; "Loveless," from Russia; "On Body and Soul," from Hungary; and the Palme d'Or winner "The Square," from Sweden.

Last year's Oscars broadcast, hosted by Jimmy Kimmel, drew 32.9 million viewers for ABC, a four percent drop from the prior year. More worrisome, however, was a steeper slide in the key demographic of adults aged 18-49, whose viewership was down 14 percent from 2016.

Though the show ran especially long, at three hours and 49 minutes, it finished with a bang: the infamous envelope mix-up that led to "La La Land" being incorrectly announced as the best picture before "Moonlight" was crowned.

This year, the academy has prohibited the PwC accountants who handle the envelopes from using cellphones or social media during the show. The accounting firm on Monday also unveiled several reforms including the addition of a third balloting partner in the show's control room. But the movie business has larger accounting problems. Movie attendance hit a 24-year low in 2017 despite the firepower of "The Last Jedi," ''Beauty and the Beast" and "Guardians of the Galaxy, Vol. 2."

It was a dominant if bittersweet day for 20th Century Fox. Its specialty label, Fox Searchlight, is behind both "Three Billboards" and "The Shape of Water," and Fox released "The Post." Yet Fox's leading 27 nominations may soon count for the Walt Disney Co., which last month reached a deal to purchase Fox for $52.4 billion.

"At times we worried it would be insurmountable, or would rip us apart, or even worse - that no one would like it," Nanjiani and Gordon said in a joint statement. "The fact that it connected with audiences is exhilarating, and this nomination proves that our love is real. We have decided to stay married."