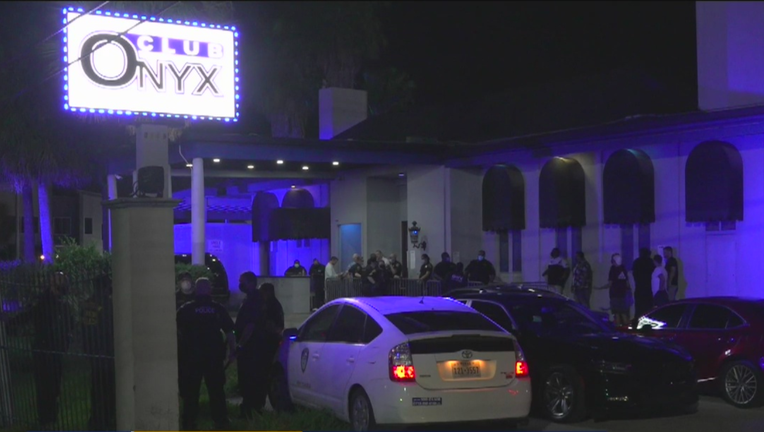 HOUSTON - A Houston strip club that was shut down by police after opening at midnight has filed a temporary restraining order against the city. A judge granted the club the restraining order allowing them to stay open until another hearing on May 8.

Earlier his week, Club Onyx announced on social media that they would be opening their doors as a “restaurant with entertainment” at midnight on May 1, the day Phase One of Texas’ reopening order went into effect.

Texas Reopens: What you need to know about Phase One on May 1

Eric Langan, the owner of Club Onyx Houston, says he can stay open due to the temporary restraining order until a court hearing May 8.

Club Onyx said they would be following state guidelines and health recommendations of social distancing, would have sanitary stations set up with hand sanitizer and staff would be practicing the strictest sanitary guidelines.

"We will let the girls entertain but their won't be any touching we've got to keep social distancing," Langan said. Customers can't hand the dancers money they can throw it at them which is what we do here anyway."

“Our officers came out to determine if it was lawfully open. Our investigation is still taking place. The club has agreed to close down for the night, and we will continue our investigation, “ Assistant Chief James Jones said.

“They said our CO, our civic occupancy, says restaurant and bar. And I said, ‘but my health permit is a full-service restaurant,” Eric Langan, president of Trumps Inc., says.

“Part of the confusion comes in, with the restaurants are now allowed to be open per the executive order from the state with 25 percent occupancy. The question will be for us whether this is a restaurant or a club. The sign says it is a club and we believe they are registered as an SOB, sexually-oriented business," Asst. Chief Jones said.

“The city took steps to enforce the governor’s executive order, which allows some, but not all businesses to reopen on Friday, May 1.

Before the pandemic, Club Onyx primarily operated and categorized itself as a sexually oriented business.

In fact, the business was part of the City’s 2013 “Sweet 16” settlement with other strip clubs. But now it claims to be a restaurant, which would allow it to reopen along with retailers and restaurants.

I am asking the state to quickly clarify whether the governor intended for sexually oriented businesses like Onyx to be apart of of the businesses authorized to open on May 1.

And if not, I am also asking the state via the Texas Attorney General to enforce the state’s order because the city cannot afford to expend its limited resources, i.e. fire and police, to defend the state’s order that a federal judge is now questioning.”

Langan says there are dancers but they are wearing masks and there aren't any lap dances.

Despite HPD shutting it down in the wee hours of Friday morning, Langan said he was prepared to open again Friday night. Since then, the club filed the temporary restraining order against the City of Houston and the police and fire departments.

YOU CAN READ THE TRO HERE