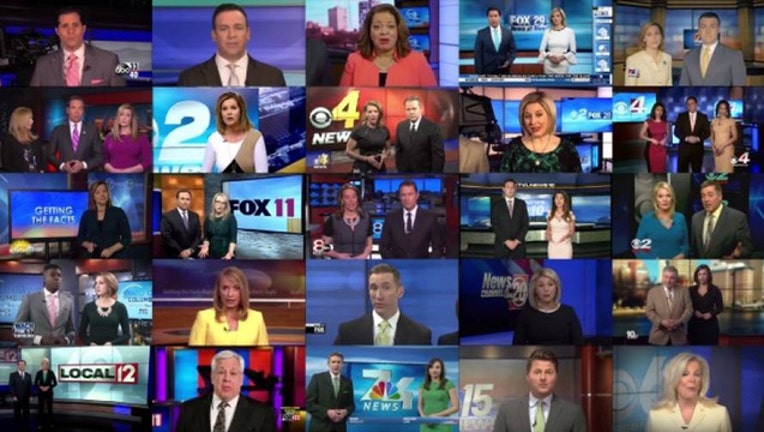 NEW YORK (AP) - A video with dozens of news anchors reading a script about "fake stories" put in stark visual terms what for weeks had largely been an academic debate about media consolidation and the Sinclair Broadcast Group's efforts to promote a consistent message across its stations.

The 98-second video, posted on Deadspin Saturday, has already been viewed by millions of people and provoked a tweet by President Donald Trump supporting the corporation on Monday.

Sinclair owns nearly 200 local stations and had ordered its anchors to read a statement expressing concern about "the troubling trend of irresponsible, one-sided news stories plaguing the country." Some outlets publish these "fake stories" without checking facts first and some people in the media push their own biases, the statement said.

The anchors give no specific examples. Sinclair, whose corporate leadership leans right, uses terminology familiar to Trump and his criticisms of "fake news." In the message, the anchors say they "work very hard to seek the truth and strive to be fair, balanced and factual."

Timothy Burke, a video editor at Deadspin, said he read a CNN story last month about the script being sent to local stations and contacted a media monitoring service to collect examples of the statement being read on the air. After receiving more than 50, he fashioned them into a video that shows anchors reading different portions of the text, either simultaneously or one after the other.

He posted a "teaser" with a small portion of the video Friday night and it quickly attracted attention when tweeted by a Wisconsin journalism professor. Not wanting to see his work appropriated by someone else, Burke said he rushed to get the full video posted Saturday afternoon. It spread quickly, particularly when tweeted by celebrities like Judd Apatow and Jimmy Kimmel.

"That's what makes the video so powerful," he said. "It illustrates a story that in some cases can read like a conspiracy theory. You can see by the video that it's not."

Sinclair did not immediately respond to requests for comment about the video. After the story was reported on CNN and MSNBC Monday, Trump jumped to Sinclair's defense.

"Funny to watch Fake News Networks, among the most dishonest groups of people I have ever dealt with, criticizing Sinclair Broadcasting for being biased," he tweeted. "Sinclair is far superior to CNN and even more Fake NBC, which is a total joke."

Meanwhile, CNN's Jim Acosta was criticized by some conservative media outlets on Monday for shouting questions about immigration to Trump while the president and first lady were attending an Easter event on the grounds of the White House.

MSNBC's "Morning Joe" did a lengthy segment on Burke's Deadspin video Monday, showing the words being repeated by several anchors. Co-host Mika Brzezinski said she was surprised some of the local anchors didn't refuse to read it.

"This looks like something we would mock the Russians for doing during the days of Pravda," said co-host Joe Scarborough.

Dan Rather's website said that it was "sickening" to watch local journalists being forced to read something that trashes their own profession.

Deadspin received a hat tip from HBO's John Oliver, whose "Last Week Tonight" did a lengthy story on Sinclair last season. "Nothing says 'we value independent media' like dozens of reporters forced to repeat the same message over and over again, like members of a brainwashed cult," Oliver said.

Burke said he's received a number of emails from people who work at Sinclair stations but he's been too busy at his regular job posting sports videos to look into them.

"I'm glad it received a large audience," he said.